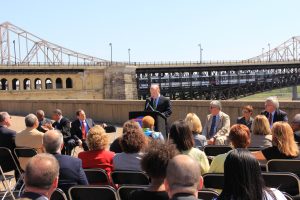 Metro President & CEO John Nations speaks as a MetroLink train (one of the almost 300 per day) crosses the Eads Bridge.

Metro Transit today announced it will restore the historic Eads Bridge in what is the first extensive rehabilitation of the support structure of the bridge in its 138-year history. The work is needed to protect this national landmark and upgrade an important piece of the region’s $1.8 billion transit infrastructure so it can continue to serve future generations. The project is expected to be completed by the fall of 2015.

The total contract amount for the project is $36 million and is largely funded through $34 million in federal support, of that $25 million is from ARRA (American Recovery and Reinvestment Act) funds.  The City of St. Louis, which co-owns the bridge with Metro, contributed a $4.8 million federal grant toward completion of the project. Of the $36 million total, $2.4 million is from local funds.

“Keeping this essential bridge safe and in good working order is not a luxury, it’s a necessity,” said Deputy Federal Transit Administrator Therese McMillan. “All across America, the infrastructure we depend on, like this bridge, is in need of modernization and repairs. We must protect and preserve all our existing transportation assets – bridges, highways, transit systems and more-so that future generations enjoy safe, reliable transportation wherever they live and work.” McMillan participated in the event with U.S. Congressman William Clay, City of St. Louis Mayor Francis Slay, St. Louis County Executive Charlie Dooley, Metro President & CEO John Nations, Metro Board Chair David Dietzel and other local officials.

The Eads Bridge, designed by James Buchanan Eads, was completed in 1874 and was the first steel structure bridge project in the United States. Now, after more than a century of use, it is in need of major repairs and a significant facelift. This structural rehabilitation project will replace support steel that dates to the 1880’s. As many as nine layers of paint and rust will be blasted off the bridge down to the bare metal, and then the bridge will be primed with a rust inhibitor, before the top coating is applied. Combined with regular maintenance painting, the anti-corrosion coating system should extend the life of the bridge another 50 years.  After enduring trains crossing the bridge nearly 300 times daily and exposure to the elements for almost two decades, the MetroLink alignment that crosses the bridge will be upgraded with new rail and ties as part of this comprehensive project. 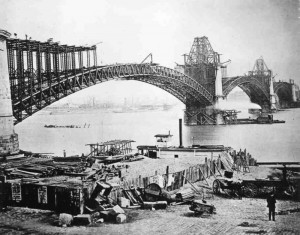 The Eads Bridge during construction.

“This project demonstrates the value our Agency brings as a regional builder, an employer of local construction trades, and an important economic engine bringing money, jobs and infrastructure improvements to the region,” noted John Nations, Metro President & CEO.

Metro obtained co-ownership of the Eads Bridge as part of the original MetroLink project.  The bridge played a critical economic and structural role in the initial plans for the region’s light rail system.

The City of St. Louis owns the vehicle deck of the bridge while Metro owns and maintains the rail deck and remaining bridge structure.

Today, MetroLink trains cross over the Eads Bridge, transporting customers to destinations on both sides of the Mississippi River.  Because of strategic planning before actual bridge reconstruction work begins, MetroLink schedules will be largely unaffected by the construction work.