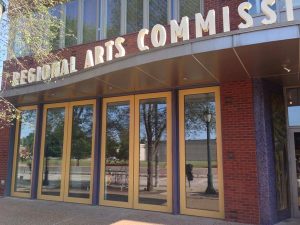 Metro Arts In Transit has received two Program Support grants from the Regional Arts Commission of St. Louis (RAC) that will be used to maintain and grow multiple Metro transit public art programs.

Metro Arts In Transit plans to use the funds to support three ongoing art programs and a future art installation at one of our MetroLink Stations. Funds from the grants will go toward:

MetroLines, our regional poetry contest that invites poets of all ages to submit up to three poems for consideration. The winning poems are displayed onboard MetroBus and MetroLink for up to one year. In addition, the 15 winning poets are invited to read their work at a public event held at the Regional Arts Commission.

Art Bus Painting events, where participants paint specially designed murals on a MetroBus and transform the bus into a rolling work of art in support of local non-profit initiatives. Artists are chosen through a competitive selection process and are paid for their design and artistic services. In recent years, we have worked with the Society for the Blind and Visually Impaired, the Peter and Paul Society, the Girl Scouts of Western Missouri, the EarthWays Center of the Missouri Botanical Garden, Maplewood-Richmond Heights Elementary Schools, St. Louis Pride and Saint Louis Earth Day. The completed buses go into regular service for a one-year period.

MetroScapes, Metro Arts In Transit’s newest program, which turns unused advertising space at our bus shelters and MetroLink stations into public exhibits for one-of-a-kind posters. Local artists are invited to submit up to three pieces for consideration, and selected artists are compensated for their work. 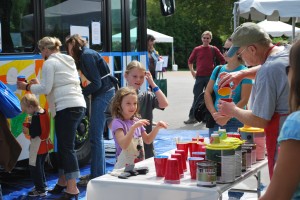 In addition to these three programs, grant funding will also be used to commission an artist to design a decorative hand rail system for the Sunnen Park-Ride lot adjacent to the Sunnen MetroLink Station in Maplewood.

“The support from the Regional Arts Commission of St. Louis reflects the impact of the work we do and the contributions Metro transit makes to the region,” said David Allen, Director of Metro Arts In Transit. “Through the support of RAC and other partners, we are able to expand and share the arts with our passengers and with the communities we serve across the St. Louis region.”