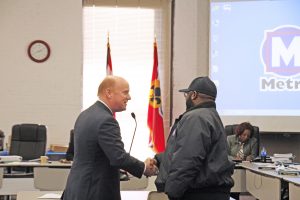 Metro Call-A-Ride operator Lamont Moore, who helped rescue a toddler and an adult from an apartment fire last month, was recognized this morning for his bravery at the Bi-State Development Agency Board of Commissioners meeting.

On October 26, Moore had just finished dropping off one of a Metro Call-A-Ride customer and was getting ready to take his  break, when he noticed black smoke in the air. Since he was in a neighborhood he used to live in, he was curious to see what was on fire. He followed the smoke and saw an apartment building burning in the 12-hundred block of Hodiamount Avenue in St. Louis.

The fire department had not arrived yet but he could see people trapped in a second floor apartment of the burning building. Their only way out was through the second-floor window. Flames were blocking them from getting out the only door in the apartment. He saw a man safely catch a child who had been dropped out the window. Then, as  a woman got ready to jump out the second floor window,  Moore jumped into action. Moore instructed the woman to climb out feet first, and then hang from the windowsill before letting go and falling to the ground. With the help of the other bystander, they broke her fall and got her to safety away from the burning building. But, Moore didn’t stop there. 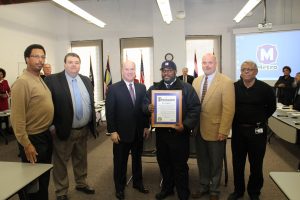 He saw a man holding a toddler at the same window. Moore ran forward and told the man he would catch the child. The man dropped the 2-year-old boy and Moore caught the toddler and took him to safety. Moments later, someone else arrived with a ladder and got the man who still in the burning apartment out. The fire department arrived shortly thereafter.

After everyone was safely out of the burning apartment, Moore looked at his watch and saw that his break was nearly over, so he went back to work as a Metro Call-A-Ride operator and drove off to pick up his next passenger.

“When I first heard of his story, I thought about how many people would have seen the smoke and looked away,” said John Nations, President and CEO of the Bi-State Development Agency. “Or how many may not have acted when faced with the fire — waiting for someone else to take responsibility.”

“But not Lamont,” Nations added. “Not only did he put himself in harm’s way for the sake of others, he did what was necessary to save innocent lives. Sometimes, we can be guilty of using the word ‘hero’ a little too freely, but I can think of no better word to describe Lamont Moore. All of his actions that day show an uncommon bravery and compassion for others.”