“We are always looking for opportunities to create infrastructure that enhances the transit experience for our riders, and compliments and beautifies the neighborhoods we serve,” said Ray Friem, Executive Director of Metro Transit. “By including artists as part of the design process, we’re able to build infrastructure that is more than just steel and concrete, but valuable assets that we all can be proud of.”

Commissioned by Metro’s Arts in Transit program, the “Adinkra Tower” was created by St. Louis artist Thomas Sleet. Represented by the Bruno David Gallery on Washington Boulevard in midtown St. Louis, Sleet is known for combining multiple artistic techniques with commonly available materials for his sculptures, including steel, aluminum and cement. 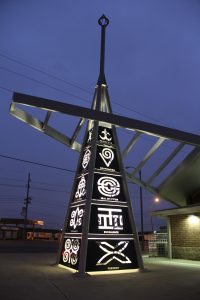 “When I was approached by Arts in Transit to consider a sculptural treatment for this site, I immediately started to think of ways to transmit messages through symbols,” Sleet said. “The symbols have a decorative function, but also represent objects that encapsulate evocative messages. It’s my hope this sculpture proves to a pillar of inspiration and aspiration for years to come.”

The “Adinkra Tower” incorporates the visual symbols known as Adinkra that were created by the Ashanti people of Ghana in West Africa. Twenty symbols representing concise statement of principle are installed on the tower, including inspirational ideals like freedom, unity, hope, excellence, courage and wisdom.

“Not only does the ‘Adinkra Tower’ serve to inspire a better quality of life in our community, it also serves as an inspiration for our organization,“ said John Nations, President & CEO of Bi-State Development. “It motivates us to set the bar even higher as we continue to promote the economic growth and development of the entire bi-state region for the greater good of all of its citizens.”

The Adinkra symbols and the words they represent are water-jet cut out of 20 aluminum panels, which are installed vertically along the four columns of the tower. Each panel is painted dark gray on the outside and white on the inside, with the symbols and words visible as the negative space of each panel. At night, a floodlight illuminates the sculpture up from the ground below, highlighting each symbol as it projects through the panels to the sky above.

“By contrasting the darkness of the panels and the inner light of the images, and the stark lines of the tower against the natural elegance of the Adinkra symbols, Thomas has created a truly powerful and dynamic sculpture,” said David Allen, Director of Metro Arts in Transit. “It really is a wonderful addition to our system, and something I know the community will take special pride in as they travel past it every day.”

Metro Arts in Transit has a proud history of enhancing transit infrastructure, beautifying neighborhoods, and bringing art to the community through commissioned artwork and art programs. One of the nation’s earliest transit arts initiatives, Arts in Transit has sponsored hundreds of art events and programs for more than 25 years. The program is supported by the Missouri Arts Council and the St. Louis Regional Arts Commission. The Riverview Transit Center is located at 8976 Riverview Drive in St. Louis. 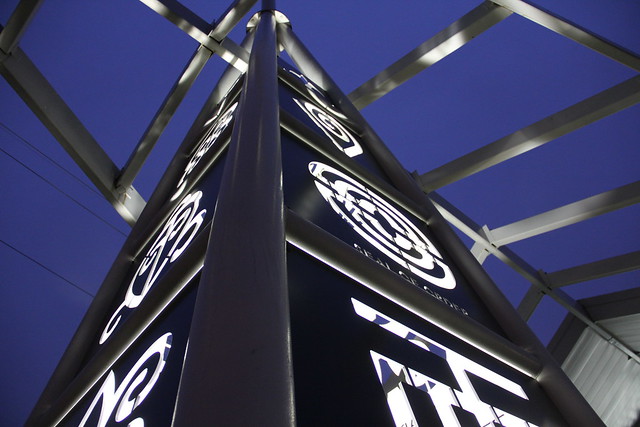