Metro Gears Up for Extra MetroLink Service for NLCS Games 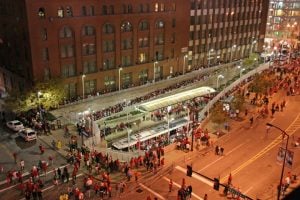 Metro transit is gearing up to provide additional MetroLink service and extra security for the first two games of the National League Championship Series (NLCS) games between the St. Louis Cardinals and the San Francisco Giants this weekend, Oct. 11 and Oct. 12, in St. Louis.

In the event the series would return to St. Louis for Game 6 and/or Game 7, extra MetroLink service will also be provided on Saturday, Oct. 18 and/or Sunday, Oct. 19.

MetroLink is a convenient way to get to the championship games and rallies. By taking MetroLink, baseball fans can avoid the stresses of dealing with road construction, traffic jams and parking issues in downtown St. Louis and can help the environment at the same time.

Free Metro Park-Ride lots are located next to 21 MetroLink stations in Missouri and Illinois. For just $5 round trip, fans can ride MetroLink to the Stadium Station or any other station in downtown St. Louis to get to the games and rallies. By using the Trip Planner feature on the Metro website, fans can determine which MetroLink Park-Ride lot is the closest to where they live.

Metro customers will notice some MetroLink, MetroBus, and Metro Call-A-Ride operators decked out in their Cardinals apparel on home game days. “Go Cards!” messages have been scrolling on MetroBus vehicles since the end of September.