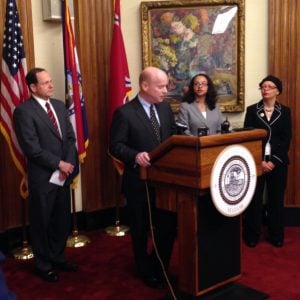 Today from noon to 1 p.m., we invite you to ask questions and share your comments with one of our leaders about transit-oriented development during our monthly Live Chat through the St. Louis Post-Dispatch.

Transit acts as a catalyst for economic development.  A recent survey by the National Council on Aging, United Healthcare and USA TODAY emphasized that point by revealing that transportation and affordable housing are the two top areas in which cities should invest in more.

“Millions of dollars in development are already being invested near MetroLink stations, and this City initiative will allow the region to do even more,” said Nations.

Nations added, “Transit-oriented development is bringing jobs, housing and businesses to the region. Since 2011, there has been more than $1.4 billion invested in new projects that have been built, are under construction or are committed for the future, within a quarter mile of the 37 MetroLink stations in Missouri and Illinois.” Check out profiles of each of the MetroLink stations for information about demographics of the neighborhoods.

MetroLink recently celebrated its 20th anniversary, and even with the investments already seen, the region has just begun to realize the benefits of its transit assets.

An example that has long benefited the region is Parson’s Place near the Emerson Park MetroLink Station in East St. Louis. It opened in 2001 creating a vibrant new residential neighborhood in an area that had not experienced infrastructure investments in decades.

Transit benefits aren’t just for the people who use public transportation. Transit is good for businesses, their employees and customers. Not everyone in the region uses transit on a daily basis, but 100% of us rely on Metro to transport workers, consumers, students, patients and clients so our economy keeps growing.

Metro is working hard to ensure that every tax dollar achieves maximum impact. We are committed to operating services that will continue to meet the needs of residents today and in the future.