In an effort to build a better transit experience for you and to fulfill a promise in our long-range transit plan, Moving Transit Forward, two new exciting Metro transit projects are about to get underway. 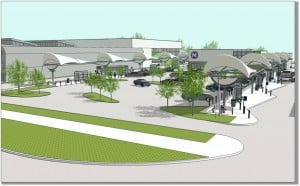 We are building a new transit center and expanding one of our busiest transit hubs. The new transit center will serve North St. Louis County, which is one of our fastest-growing public transit markets and it accounts for nearly one-fifth of our MetroBus and MetroLink ridership in Missouri.

A former auto dealership located on Pershall Drive in Ferguson along Interstate 270 and the vacant lot next door will become the future Metro North County Transit Center and Maintenance Facility.

Metro successfully competed for and was awarded federal funding to help plan and build the North County Transit Center. Construction on the project will take place in two phases.

The first phase will include the renovation of the existing building. That space will include a climate-controlled waiting area, public restrooms, a concession area and digital messaging boards with MetroBus arrival times. The center will accommodate 10 MetroBus bays, 2 Metro Call-A-Ride bays and Park-Ride spaces for customers.

Construction for Phase 1 is scheduled to begin early this fall and should be completed by next fall.

Phase 2 plans focus on constructing a garage that will accommodate 70 MetroBus vehicles, 25 Call-A-Ride vans, and will include MetroBus and Metro Call-A-Ride maintenance and a dispatch center. Federal funding still must be secured before plans for the second phase of that project can move forward.

The design contract for both phases of the project was awarded to NCTC 2013 JV, a joint venture between STV Inc. and KAI. The contractor for the North County Transit Center project has not been selected yet. 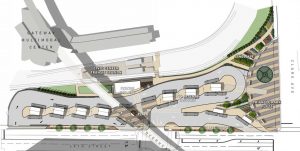 We are also expanding the Civic Center Transit Center at 14th and Spruce Streets in downtown St. Louis. It is one of our busiest transit hubs, serving MetroLink, 18 MetroBus routes and Metro Call-A-Ride service. The center needs more space to better serve the high number of MetroBus routes converging at this location.

The expansion will include 18 MetroBus bays, 2 Call-A-Ride bays and space for future use by 60-foot articulated buses. A new building will also be constructed and include a climate-controlled waiting area, public restrooms, digital messaging boards, a security sub-station and concessions.

In order to prepare the site for construction, it was necessary to cut down bald cypress and oak trees. The trees were removed prior to April 1 so as not to affect migratory bird nesting patterns. Metro will plant trees at another location  or work with a local forestry project.

The design contract for the project was awarded to Arcturis Inc. The contractor has not been selected yet. The Civic Center Transit Center expansion project is scheduled to be completed by fall 2015 with construction expected to begin in fall 2014.