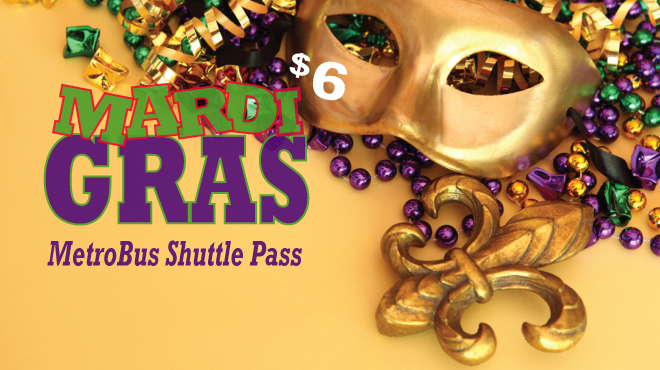 Metro transit is offering special MetroBus shuttle service for parade-goers and celebrants to safely and conveniently travel to Mardi Gras festivities and the 2016 Grand Parade in the Soulard neighborhood on Saturday, February 6. Metro will operate special Mardi Gras shuttle buses from 9 a.m. to 11 p.m. between Soulard and the Civic Center MetroLink Station which is located at the corner of Spruce Street and 14th Street in downtown St. Louis.

The special shuttles will run every 15 minutes and will drop off and pick up passengers in Soulard on 10th Street between Carroll Street and Marion Street. Round-trip passes for the Mardi Gras shuttle are $6 and can only be purchased on Saturday, February 6, at the Civic Center MetroLink Station, starting at 9 a.m.

“Instead of navigating through street closures and competing for limited parking spots, we encourage everyone to let Metro do the driving to the Soulard Mardi Gras,” said Ray Friem, Executive Director for Metro Transit. “Park your car for free at one of our 21 Metro Park-Ride lots in Missouri or Illinois, take MetroLink to the Civic Center Station, buy a Mardi Gras shuttle pass and let one of our special shuttles get you to all of the fun, safely and easily.”

MetroLink trains will operate every 20 minutes on the Red Line and Blue Line on Saturday, February 6, with trains arriving every 10 minutes at stations between the Forest Park-DeBaliviere and Fairview Heights MetroLink Stations. The MetroLink platforms will be monitored for crowds throughout the day and add extra MetroLink service will be added as needed.

Mardi Gras celebrants can also get to the festivities in Soulard by via MetroBus. The #8 Bates-Morganford, #10 Gravois, #30 Soulard, #40 Broadway and #73 Carondelet MetroBus routes serve the Soulard area. Even though there will be detours in place on February 6, these routes will still get riders close to the celebration. Parade-goers and revelers are asked to leave their backpacks and coolers at home since they are not allowed at the Soulard Mardi Gras. No food, drink or alcohol is permitted on MetroLink, MetroBus, the Mardi Gras Shuttles or on Metro property.

Due to Mardi Gras festivities and the 2016 Grand Parade taking place on February 6, the following MetroBus routes will be rerouted.

#8 Bates-Morganford — from 3 a.m. until end of service