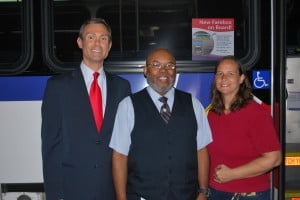 Every day, Metro transit employees keep the St. Louis region moving and go above and beyond to take care of passengers. Jessie Jones, a MetroBus operator for seven years, is only one example of those who go the extra mile.

A regular Metro rider, Tracy Adair-Kirk of Ballwin, nominated Jones to be honored by KTVI Fox 2’s Pay It Forward segment. Jones found her wallet and turned it in to Lost and Found after she left it on the bus during her work commute. Jones drives the 58x Twin Oaks Express.

“The morning after I lost my wallet, I called Metro’s St. Louis customer service, and then the Lost and Found department where they had my wallet waiting for me,” said Adair-Kirk.

She added, “When I picked up my wallet, I was so thankful to have it back, but even more excited to find out that not a single thing was missing. I felt very blessed and appreciative of this great honest man. The world needs more people like him.”

To show her appreciation, she contacted Fox 2’s Elliot Weiler and the television station agreed that Jones would become a Pay it Forward honoree. This expression is used to describe the concept of asking that a good turn be repaid by having it done to others instead.

Congratulations to Jones and thanks to all the other transit employees who look out for customers and make Metro among the top performers in the industry.

Link to the Fox 2 News story.