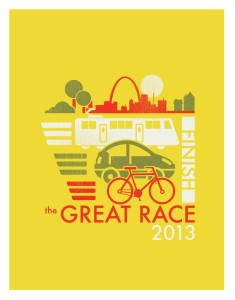 Metro Transit is proud to be participating on Team Transit in CMT’s Great Race II.

Designed to play off the CBS television hit, “The Amazing Race,” (minus host Phil Cogen of course) the race will place Team TRANSIT, Team BIKE, Team CARSHARE, and Team CARPOOL in a head-to-head competition to see which transportation mode can travel from downtown St. Louis to Clayton the fastest.

Rally behind your favorite team through social media! Also, make plans to take part in a fun-filled community event on May 30.

Get in on the action by cheering on your favorite team at the starting point and celebrating alongside them at the finish line!

We hope to see you there!