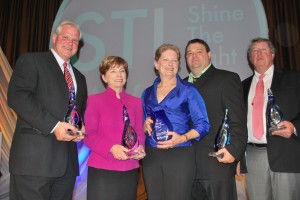 The master of ceremonies was Marc Cox, former KMOV-TV reporter.

Chief Operating Officer of Transit Services at Metro Ray Friem accepted the award on behalf of Metro and its 2,500 employees. “We are honored to be recognized tonight for our part in making St. Louis more accessible for residents and visitors,” said Friem. 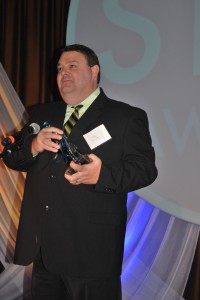 “Not only were we one of the first transit agencies in the nation to purchase buses with lifts, but we also designed the first light rail system in the country to be completely Americans With Disabilities Act (ADA) accessible.”

Earlier this week, Metro celebrated another milestone, the 25th anniversary of Metro Call-A-Ride which is a vital source of transportation for those with mobility needs.

“We continue to strive to make the St. Louis area better. We are working closely with Paraquad and street and road agencies around the region to make bus stops more accessible including installing curb cuts,” explained Friem. “Through these improvements, services, travel training and regional transfer centers, Metro is the portal to a world of opportunities and possibilities.”

Metro is committed to improving the quality of life in the St. Louis region and is proud to help people reach their potential by living free and independent lifestyles.

Click here to view more pictures from the AccessibleSTL Awards.