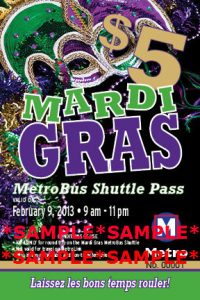 Once again, Metro is offering a shuttle to and from St. Louis Mardi Gras in Soulard. Don’t bother with traffic and parking. Let us drive you!

Metro Transit is offering special MetroBus shuttle service for Mardi Gras revelers to safely and conveniently get in and out of Soulard in St. Louis for the 2013 parade and celebration on Saturday, February 9.

Mardi Gras shuttle passes cost $5 each and will be valid from 9 a.m. to 11 p.m. for roundtrip travel on designated shuttles providing service between Soulard and the Civic Center MetroLink Station, located at the corner of South 14th St. and Spruce St. in Downtown St. Louis. The shuttles will run every 15 minutes and will drop off and pick up riders at 10th St. and Marion St. near the Soulard Farmers Market.

Riders can get to the Civic Center Transit Center by MetroLink or MetroBus and can then either buy a pass for the Mardi Gras Metro Shuttle or Mardi Gras goers can also choose to take regular MetroBus routes that service the Soulard area. The #8 stop at 12th and Russell is 4 blocks away from the parade route and the #10 at Gravois and Tucker is also about 4 blocks away. The #30, #40, and #73 routes are along the parade route and will be rerouted but they will still get you close to the celebration. Check back for reroute updates.

Mardi Gras passes will be sold in advance starting this Friday, February 1 at the MetroRide store located at 7th St. and Washington Ave. in Downtown St. Louis.

No alcohol is permitted on the shuttles, MetroLink trains, Metro vehicles, or Metro property.

For more information on the MetroBus Shuttle Pass or the Mardi Gras shuttle schedule, call 314-231-2345. For Mardi Gras parade information and other event times, visit www.mardigrasinc.com.