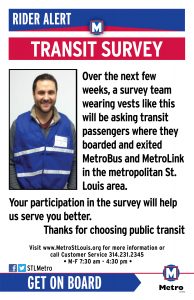 The final phase of a regional on-board public transit survey by the East-West Gateway Council of Governments is now underway with random Metro transit customers being asked to participate.

The purpose of the On-Board Transit Survey is to predict future transportation needs in the region.

The Metro transit portion of the regional survey involves two major efforts:  An “on-to-off” survey and a “main” survey.

The “On-to-Off” Survey began in February and has concluded. It identified the locations where riders board and exit each MetroLink and MetroBus route.

Phase 2, or the main transit study, involved collecting more detailed data about how customers use the MetroBus and MetroLink system and  that phase was completed in April and May.

This final phase is an extension of Phase 2 with survey crews simply catching up on routes that required further survey coverage. The survey process resumed today on MetroLink and will continue over the next two weeks. Surveying MetroBus customers will begin the Tuesday after Labor Day.

Most surveys are conducted during face-to-face interviews and most answers will be recorded on a tablet device. Each survey takes about 5 minutes to complete. Survey team members will only interview and record answers from one passenger at a time. They will be wearing the blue vests like what is shown in the photo above.

The results of this survey will be used to update the regional travel demand model.