Metro Transit was recently notified it has received special recognition by two separate organizations for our commitment to safety.

“Customer safety is our top priority. We are proud to be recognized as among the best of the best for our MetroBus practices,” said Ray Friem, Metro Chief Operating Officer Transit Services. “A reputation of excellence doesn’t  just happen overnight, it takes years of effort.  We have been building a team  committed to sustained excellence for over a decade. These efforts are now paying off,  in any number of ways, but particularly in the area of bus vehicle predictive monitoring maintenance.” 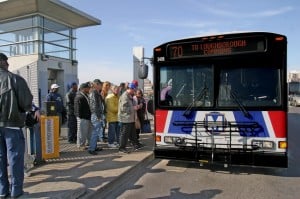 safety for passengers and employees and for our initiative in introducing protocols, products and procedures that ensure passenger and employee safety.

The prestigious award is presented to agencies in the bus and motor coach industry that provide a product or service that contributes to the overall safety of buses and bus travel in general.

Steve Kane, BUSRide Magazine Editor and Chief and Publisher said Metro’s efforts in this area make us truly deserving of this award.

Metro was also recognized by Transit Safety Solutions in its 2012 Top Bus Technology and Safety Initiative Awards as one of the top agencies committed to higher levels of bus safety and for proactive safety plans.

“The agency (Metro) first engaged in predictive monitoring model in 2005 to foresee equipment failures,” stated Transit Solutions in its awards announcement earlier this month. “Predictive monitoring technology compares real-time data to normal parameters established in the model. Any deviation from the norm translates as a triggering event that suggests the type of failure that is in store, and predicts when it is likely to occur.”

The award recognition goes on to point out that Metro personalized each bus in the fleet to eliminate any generalization as to why and when to send a particular vehicle in for maintenance. Real-time sensors measure road speed, engine speed, engine load, cooling temperatures, oil pressure, fuel consumption, as well as ambient temperatures outside the bus. The information feeds to a central computer for analysis and follows with an Internet presentation to service technicians.

“Now a failure of any sort is something Metro St. Louis takes very personally, right along with safety,” noted Transit Solutions.

Congratulations to Metro and the entire MetroBus team.