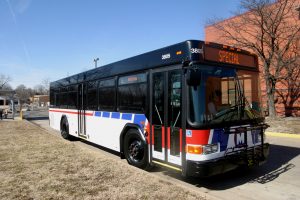 APTA reported that Arlington Heights, Illinois followed St. Louis with a 5.3 percent increase in bus ridership from January through September, Newark, New Jersey with a 5.2 percent and Oakland, California at 5 percent. APTA also announced that nationally, bus ridership rose by 1.8 percent for the first three quarters of 2012.

MetroLink ridership increased 4.67 percent from January through September of this year. MetroLink recorded nearly 13 million boardings the first three quarters of this year as compared to 12.4 million during the same period last year. 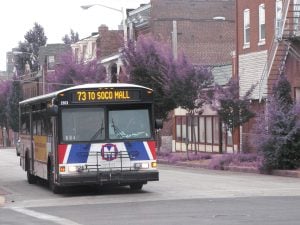 Jessica Mefford-Miller, Metro Chief of Planning and System Development said she believes several factors contribute to the increased ridership. “We started the year with unseasonably warm winter weather. There is a correlation between weather and MetroBus ridership. When the weather is nice, ridership goes up. Combine that with a rebounding economy and people rejoining the regional work force means we are seeing more Bi-State area residents choose MetroBus. And we are continuing to see the impact of riders returning to Metro following the 2009 service cuts.”

“Other residents are beginning to realize MetroBus and MetroLink are great ways to save money on gas and on parking while cutting out the stress of sitting in traffic jams day after day,” said Mefford-Miller.  “You would be surprised at how much money you can save at the pump by taking Metro instead of driving to work every day. Just go to our website www.metrostlouis.org and enter your information to find out how much money you can save on gas.”

Increased ridership has resulted in service increases on some of MetroBus’ busiest routes which were implemented on June 11, 2012. Mefford-Miller said Metro is also looking at other routes to add additional service to next year, as funding permits.