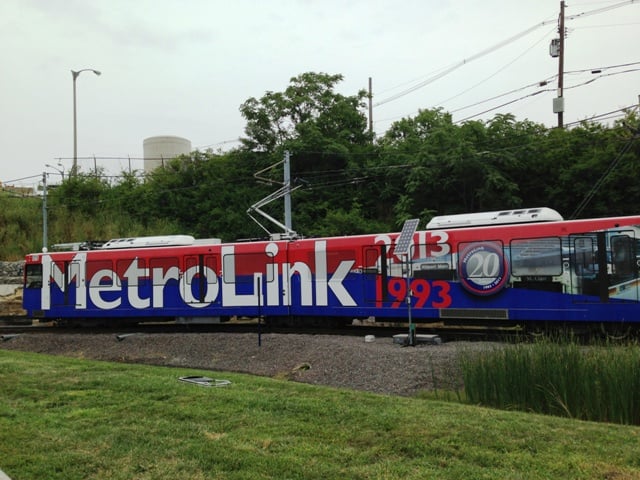 The event, which was open to Metro customers and members of the general public, kicked off with Bi-State Development Agency (BSDA/Metro) President and CEO John Nations, Chairman of the Bi-State Development Agency Board of Commissioners David Dietzel along with Dooley, Kern, Costello and others arriving at the Grand Station on a 20th anniversary commemorative, specially wrapped MetroLink train.

“With more than 17 million boardings annually, it’s easy to see what a viable transportation option MetroLink is in our region today, but getting there took years of hard work, regional cooperation, federal assistance and the vision and dedication of so many,” said Nations. “Today’s event provides a perfect opportunity to reflect on and celebrate the impact MetroLink has already had on the St. Louis region and to look forward to its future success.”

Dooley noted how there are no major metropolitan regions in the United States or the world without public transportation, stating “Metro truly is a regional asset.”

Meanwhile, Kern also spoke about MetroLink’s regional role, noting “MetroLink is a ribbon that ties the region together.”

Charles Bryson represented St. Louis Mayor Francis Slay at the event. He talked about the light-rail system’s role in helping the region grow over the past two decades. “MetroLink is a link to job growth,” Bryson said. “It’s a link for us to become tourists in our own town, and it’s a link between our neighborhoods.” 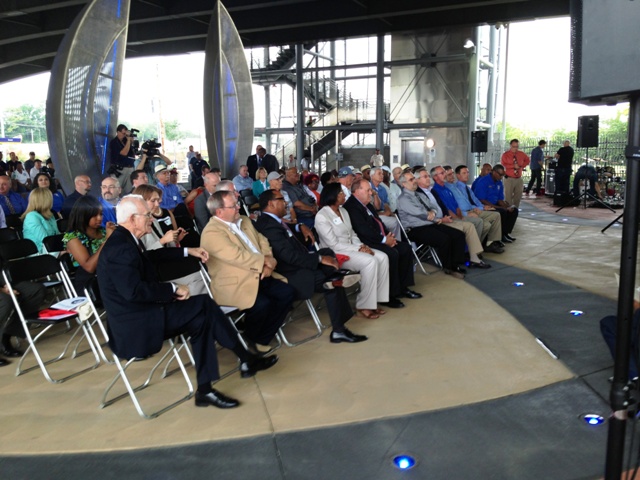 Costello noted how MetroLink has continued to exceed expectations. “This is a highly-successful system that is used as an example across the nation,” Costello said. Addressing Nations, he added, “If you’ll continue to keep MetroLink safe, clean and affordable, we’ll continue to break ridership records, and the system will continue to be one of the best in the nation.”

The first phase of MetroLink officially opened on July 31, 1993 with a 14-mile stretch from North Hanley in North St. Louis County to 5th and Missouri in Illinois. Today, the light-rail system has 37 stations, stretching 46 miles, connecting citizens traveling between Lambert-St. Louis International Airport, Shrewsbury, Missouri, downtown St. Louis and communities as far east as Scott Air Force Base near Shiloh, Illinois. Over the past two decades, the light-rail system has carried an estimated 300 million riders.

Commuters currently rely on MetroLink for transportation to employment centers, recreational and entertainment venues, health care institutions and other important destinations across St. Louis City and St. Louis County and the Metro East. Over the past 20 years, MetroLink has also served as a catalyst for economic development in the region, with an estimated $2 billion in residential and commercial development projects already complete around the alignment and other plans for development underway.

Among the successful existing transit oriented developments are the Meridian near the Brentwood I-64 MetroLink Station, the Emerson Park development in East St. Louis, and, most recently, the Mercantile Exchange development in downtown St. Louis.

Over the years, continued operational improvements have also enhanced service for MetroLink customers. Recent projects include the Scott Avenue Transit Plaza at the Grand MetroLink Station, and the installation of the UMSL South Interlocking and the East Riverfront Interlocking. The East Riverfront Interlocking was an essential component before a three-year project could get underway to refurbish the historic Eads Bridge superstructure and rail deck so it can serve as a vital bi-state link for at least 50 more years.

“The last two decades have been successful for MetroLink, and with the light-rail system playing such a critical transportation role in our community, we are committed to doing all we can to ensure it continues to be a success story for our region,” noted Nations.

He added, “The many accomplishments of MetroLink to date represent the first chapter in a story that’s just begun to be written. While I can’t tell you just where the light-rail system will go next, I can say the Bi-State Development Agency is working to Move Transit Forward by continuing to develop public-private partnerships and working with local, state and federal leaders to explore more transit options in Missouri and Illinois – with the goal of continuing to expand this magnificent system to better serve our region’s commuters. The future of MetroLink is bright and we look forward to what’s to come.”