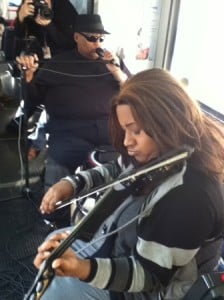 The Charles Glenn Duo performed on the Holiday Magic Train on Nov. 30.

Beth Bombara performed aboard the Holiday Magic Train for about two hours on December 7 starting at the Fairview Heights MetroLink Station and going to the end of the Red Line at the stations at the Lambert-St. Louis International Airport and back to Fairview Heights.

The Holiday Magic Train is a partnership between the St. Louis Convention and Visitors Commission (CVC) and Metro transit. This is the fourth year the specially decorated train has traveled on the MetroLink system from the Friday after Thanksgiving through December 31 to bring holiday cheer to thousands of area commuters. 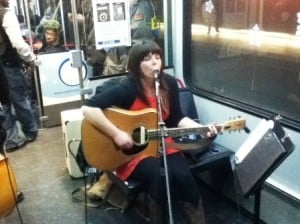 Beth Bombara and her band performed on Dec. 7.

The Holiday Magic Train is decked out with blue, silver and white snowflake ornaments with garland. Snowflake decals decorate the train windows and big holiday wreaths adorn the front and back of the train.

On Saturdays, the Holiday Magic Train is in service from about 10 in the morning until around 6:45 p.m. and it alternates on Saturdays between the Red Line and the Blue Line. On Tuesday, December 25, the train will operate from approximately 10 a.m. to 6:45 p.m. on a Sunday frequency schedule.

Here are a few videos from this year’s Holiday Magic concerts.

If you missed the onboard performances, make sure to mark your calendars for next year!