When you meet MetroLink Transit Service Manager (TSM) Amos Armour, you can tell he is a quiet, caring, and hardworking man.  And, it is no surprise he would do something out of the ordinary by going above and beyond to help a deputy from the St. Clair County Sheriff’s Department arrest a fare evader on a MetroLink train. 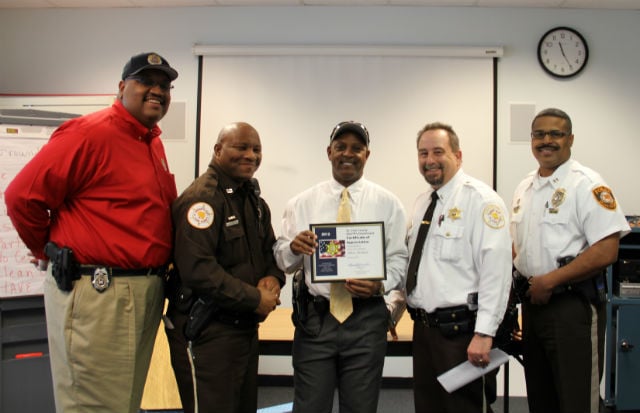 One morning in January, Armour and another co-worker were helping passengers at the Emerson Park MetroLink Station. The pair then boarded the next eastbound train.  While waiting for it to depart, they heard a commotion in the aisle.

As passengers stepped aside, Armour saw a man trying to get away from the St. Clair County Sheriff’s Department deputy who was assigned to the train. The passenger did not have a valid ticket, and pushed the law officer out of the way and headed toward the door. Deputy Christopher Davis grabbed his arm and upper body, to bring him to the floor.  But the man was determined to get away, so he grabbed on to one of the hand rails, and tried to position his foot outside the train door to escape.

Seeing that the fare evader was trying to get away, Armour jumped into action, and grabbed the man and held him down until Davis could get handcuffs on him.  The fare evader was immediately taken off the train and into custody at the Emerson Park Police Sub-Station.  He was later taken to the St. Clair County Jail where he faced a several violations.

On February 1, Armour was presented with a special certificate for his efforts. Armour said, “Looking back in hind sight, I am just glad there were no injuries and that everyone was okay!”  He smiled and went on to say, “I am not the hero because the St. Clair County Sheriff’s Department is great. Whenever we call them, they’re right there, ready to assist.”

Armour enjoys being a MetroLink Transit Service Manager.  For the last six years, he has worked as a TSM for Metro in Missouri and Illinois. He is just one of the many Metro employees who continues to go above and beyond the call of duty whenever needed because they care about the Agency and its transit system.