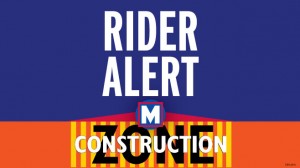 MetroLink will operate on a single track at the Maplewood-Manchester and Sunnen Stations from 8 p.m. until the end of service Monday to Thursday (April 14-17), to accommodate crews conducting track maintenance work.

Blue Line trains will only operate between the Forest Park-DeBaliviere and Shrewsbury-Lansdowne I-44 Stations
from 8 p.m. until the end of service Friday (April 18), and all day Saturday (April 19) and all day Sunday (April 20), to accommodate crews conducting platform maintenance work at the Central West End MetroLink Station.