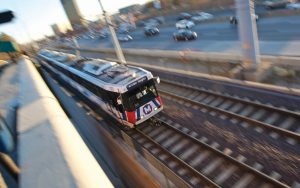 Sunday, March 1 Update: Construction work on the alignment was completed early, and MetroLink trains have resumed regular operation between the 5th & Missouri and Stadium MetroLink Stations. Shuttles are no longer being used to transport passengers by bus between these stations.

MetroLink passengers on the Red Line and the Blue Line should allow extra time for their late evening and weekend commutes this week. MetroLink passengers traveling between Missouri and Illinois on Saturday, February 28, and Sunday, March 1, may experience delays of 20 to 30 minutes.

To accommodate the installation of overhead conductor rail along sections of the MetroLink system:

On Wednesday, Thursday and Friday (Feb. 25, Feb. 26 and Feb. 27) from 11:30 p.m. until the end of service, MetroLink will operate on a single-track at the following stations:

MetroLink passengers traveling BOTH eastbound and westbound will have to board MetroLink trains from the WESTBOUND platforms at the Stadium, 8th & Pine, Convention Center and Laclede’s Landing Stations. Red Line and Blue Line customers may experience delays of up to 10 minutes

The following MetroLink stations will be served by MetroLink Station Shuttle buses on Feb. 28 and March 1:

Metro will have personnel at all of the affected stations to assist customers to the designated MetroLink Station Shuttle areas.

Updates on MetroBus and MetroLink operations can be found on the Rider Alert section or via social media on Metro’s Twitter feed at @STLMetro and on Facebook at St. Louis Metro Transit.