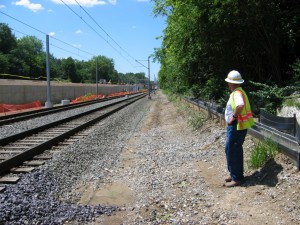 MetroLink passengers are encouraged to allow extra time for their commutes next week, especially if they are traveling to Lambert-St. Louis International Airport.

Station rehabilitation work will require the Lambert Airport Terminal #1 MetroLink Station to temporarily close for two weeks beginning Monday, July 27. In addition, MetroLink will operate on a single track to accommodate crews performing maintenance work next week on the Blue Line at the Clayton MetroLink Station and Forsyth MetroLink Station.

Monday through Sunday (July 27 – August 2) from the beginning of service until end of service, the Lambert Airport Terminal #1 MetroLink Station will be closed.

Monday through Thursday (July 27-30) and Sunday (August 2) from 8 p.m. until end of service, MetroLink will operate on a single track at the Clayton and Forsyth MetroLink Stations.