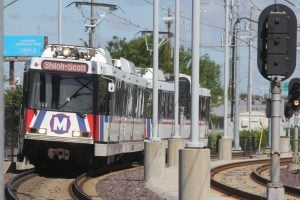 MetroLink riders are encouraged to allow extra time for their commutes next week (June 1-7) as maintenance work on the MetroLink system may result in delays for some Red Line and Blue Line passengers.

To accommodate work crews, MetroLink will operate on a single track at the College, Shiloh-Scott, Union Station and Civic Center MetroLink Stations. In addition, Blue Line MetroLink trains will only operate between the Shrewsbury-Lansdowne I-44 and Forest Park-DeBaliviere MetroLink Stations next weekend.

Monday through Thursday (June 1-4) and Sunday (June 7) from 8 p.m. until end of service, regular Red Line MetroLink service will end at the College MetroLink Station. Customers who normally park at the Shiloh-Scott Station are encouraged to park at the College Station on the affected dates to avoid delays after 8 p.m.