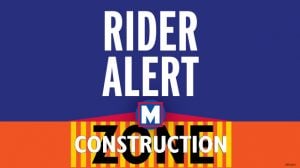 Update: Rail installation on the Eads Bridge was completed earlier than expected. As such, we have cancelled construction in this area for the remainder of the week.

MetroLink work is scheduled on the Eads Bridge Monday through Wednesday (June 25), and as a result, some Red and Blue Line passengers may experience 5 to 10 minute delays.

MetroLink will operate trains on one track at the East Riverfront Station to accommodate crews installing new rails on the bridge.

Due to the rail work, Blue Line trains will only operate from the Forest Park-DeBaliviere MetroLink Station to the Shrewsbury Lansdowne I-44 MetroLink Station from 8 p.m. until the end of service each night Monday (June 23) through Wednesday (June 25).

Red Line customers may experience delays of up to five minutes because of the rail work.