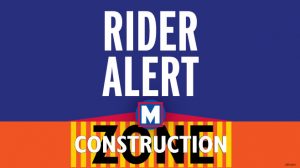 MetroLink will operate on a single track at the Maplewood-Manchester and Sunnen Stations from 8 p.m. until the end of service Monday to Friday (March 31-April 4), and all day Saturday (April 5) and Sunday (April 6) to accommodate crews conducting maintenance work.