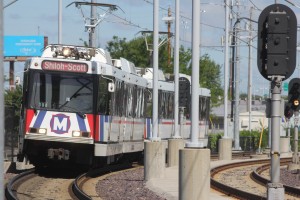 Customers are encouraged to allow extra time for their evening commutes next week as maintenance work on the MetroLink system may result in delays for some Red Line passengers.

On Tuesday through Friday (May 26-29) and Sunday (May 31) from 8 p.m. until end of service, regular Red Line MetroLink service will end at the College MetroLink Station. Customers who normally park at the Shiloh-Scott Station are encouraged to park at the College Station on the affected dates to avoid delays after 8 p.m.

On Sunday (May 31) from the beginning of service until 11 a.m., the 8th & Pine MetroLink Station will be temporarily closed. This closure is necessary to ensure the safety of Metro passengers and employees as large air conditioning units are moved near the station during this period of the morning. Passengers traveling to downtown St. Louis that morning are encouraged to use one of the four other MetroLink stations serving the downtown area: Civic Center, Stadium, Convention Center and Laclede’s Landing MetroLink Stations.