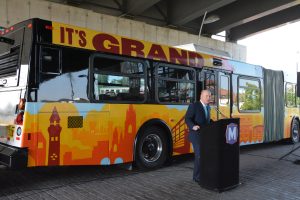 Metro transit customers, the Grand Boulevard community, regional leaders and the public had the opportunity to get a close up look at the newest and biggest addition to the MetroBus fleet at a special event today at the Grand MetroLink Station.

Starting this Monday, June 9, seven 60-foot articulated buses will go into service on the #70 Grand Line which is approximately 10-miles long. By the end of this year, a total of 15 articulated buses serve MetroBus customers on the route.

The #70 Grand Line, which records the highest ridership of any MetroBus route, records about 9,000 boardings each weekday. Thousands of people depend on it to get to work and school, as well as to medical appointments, entertainment, dining and shopping venues. 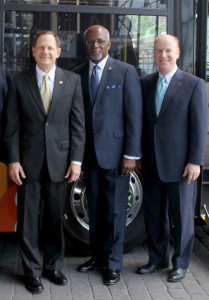 By adding 60-foot long buses to the MetroBus fleet, we are increasing capacity by 25 percent. Each articulated bus has 54 seats and more room for standing passengers.

“After you see the inside of the buses, you will find it hard to believe they are actually used vehicles made by New Flyer which have been totally rebuilt by Complete Coach Works,” Nations said at the news conference today. “Our transit system here in St. Louis is a model for other transit agencies around the world for its efficiencies, reliability and service capabilities.”

The total cost of the 15 rebuilt articulated buses is about $6.4 million, half of what it would have cost if the buses had been purchased new. Eighty percent of the money used to purchase and rebuild the vehicles is from federal sources; the other 20 percent are local funds.