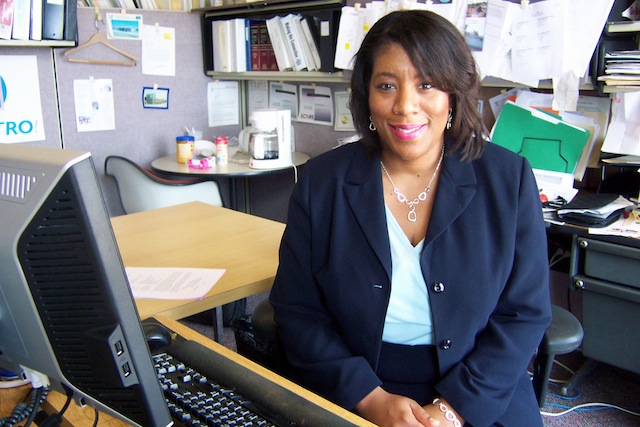 Tracy Beidleman, our Director of Program Development and Grants, has received the first-ever Award of Excellence for Outstanding Customer Service and Financial Oversight of FTA Projects in St. Louis presented by Region VII of the Federal Transit Administration (FTA).  Go Tracy!

William Kalt, Team Leader for Operations and Program Management at FTA Region VII in Kansas City, said the high recognition for Beidleman was a special, perhaps even just a one-time award, presented to honor her extraordinary performance in complicated and demanding collaboration between Metro as a recipient of federal grants and the FTA as the agency that administers the grants. Kalt said FTA Regional Administrator Mokhtee Ahmad proposed the new award, which has never been presented to a transit-agency employee before.

“The award was presented to Tracy based on her dedication, her competence and her superior ability to communicate with FTA,” Kalt said. “She is truly deserving, given her great attention to detail, her incredible responsiveness to our many needs, and her extremely complete knowledge of all FTA requirements and all Metro projects.”

Kalt said the FTA and Metro must have a close working relationship because Metro is the largest transit agency with the most grants in Region VII. He said Region VII administrators have always joked that, if every agency had someone like Beidleman working for them, it would make FTA’s job so much easier that everyone there could work half-time.

“She is a valuable asset to Metro and to the FTA,” Kalt said. “She provides a real cost savings to Metro because she has the information to deal with the FTA. The FTA doesn’t need to conduct as many reviews at Metro because of her performance.”

Beidleman, of Florissant, has been at Metro for 11 years. She said she had not been told about the award before it was presented at a recent regional conference for FTA Region VII.  “I was quite surprised by it. It was quite an honor,” she said.

Thanks so much Tracy for all your hard work and dedication.  Congratulations!