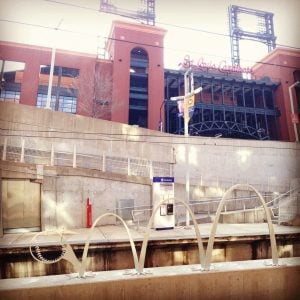 The St. Louis Cardinals are just days away from kicking off the 2013 season on the road with the home opener scheduled for Monday, April 8.  I may have only lived in St. Louis for a little while, but one thing I learned quickly, other than expect the unexpected weather, was St. Louis loves its Redbirds. And, MetroLink is a popular way for many Cardinals fans to get to the games at Busch Stadium.

This season, there is something new at the Stadium Station. A sculpture with a baseball and Gateway Arch theme now decorates the median. The new artwork is part of a commitment to upgrade MetroLink Stations in the original part of the light rail alignment.

“We are very excited about the new artwork at the Stadium MetroLink Station,” said David Allen, Director of the Metro Arts in Transit Program.  “It absolutely nails the public art trinity of time, place and action for the thousands of baseball fans at the Stadium Station.”

Farrell said it was an honor to celebrate the improvements to the station and to dedicate the wonderful sculpture. He said Cardinals fans and employees at Busch Stadium rely on Metro with more than 20 percent of the fans arriving via MetroLink.

Created by Jennifer Andrews and Gregg LeFevre from the Andrews/LeFevre Studios in New York City, the sculpture is an abstraction of a baseball being hit “Out of the Park;” bouncing down the median between the Stadium Station MetroLink tracks. The bounce pattern of the ball echoes the shape of the Gateway Arch. The sculpture is made from 1” thick anodized aluminum so it looks like a miniature set of Gateway Arches. It stretches 18 feet long and is 6 feet high.

“One of the things we found over and over while researching the history of baseball in St. Louis is the devotion of its fan base. St. Louis is a city that really supports her home team, and baseball is tightly woven into the thread of civic life in a deep and historic way,” said Andrews.

Andrews and LeFevre decided rather than make a historic statement about an individual team member or a famous player, they would create artwork that celebrated St. Louis’ connection with baseball—a piece that would celebrate the community of fans and that would also be for the fans to enjoy.

Andrews/LeFevre Studios has created more than 200 site specific public art installations for corporate and public art programs and private institutions. Their work has been commissioned by a number of cities including New York City, Chicago, Boston, Los Angeles, Seattle and Miami. The team is currently working on an integrated art experience for a new library in Pompano Beach, Florida, artwork for a courthouse in Richmond, Virginia, a World War II West Coast Memorial Medallion in California, and was awarded the commission to design a memorial to civil rights leader Charles Hamilton Houston in Alexandria, Virginia.

The sculpture is the second of 10 Metro Arts in Transit projects scheduled to be created and installed at Metro Transit locations over the next couple of years. This $50,000 sculpture was made possible by funds from the American Recovery and Reinvestment Act (ARRA) awarded by the Federal Transit Administration (FTA).