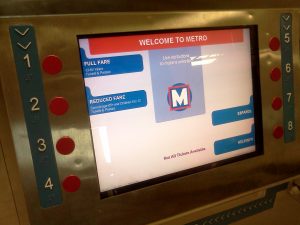 The installation of new Metro Ticket Vending Machines (TVMs) and Ticket Validators on MetroLink platforms begins in Illinois on Tuesday, August 28, 2012.  This will mark the beginning of the equipment conversions necessary for future upgrades to Metro’s entire fare collection system.

“The original machines are being removed and replaced by new state of the art equipment,” said John Nations, Bi-State Development Agency/Metro President & CEO. “This is one of several things we are doing to build a better transit experience for our customers.”

The TVMs will be replaced in their current locations except for those at the Memorial Hospital MetroLink Station which will be relocated.  The new Ticket Validators will also be installed in the same locations but will look slightly different than the ones they replace.

“The old machines have served us well since 1993, and have far outlived their useful life,” said Ray Friem, Chief Operations Officer of Transit Services.  “So, we are retiring the oldest Ticket Vending Machines on the alignment and installing new ones with more customer conveniences.”

Now customers who purchase transit tickets or passes in Illinois will be able to use a credit or debit card just as those who use the TVMs in Missouri. They will have the option of buying a 1-Day, 7-Day, or 30-Day pass and will be able to choose the date the pass becomes valid. Customers will also be able to select a “round-trip” ticket option (to purchase two single ride tickets withone single transaction). TVMs and Ticket Validators in Missouri will get upgrades starting later this year.

Metro staff will be available at MetroLink Stations during morning rush hour on August 29 at the 5th & Missouri MetroLink Station to assist customers with questions about the new machines. They will also be assigned to the other Illinois MetroLink stations as the new equipment  is installed to help customers purchase tickets and to answer their questions.

Other examples of Metro Transit capital improvements include the new Scott Avenue Transit Plaza at the Grand MetroLink Station, UMSL South interlocking project under construction, new enhancements at seven MetroLink stations over the next year, the rehabilitation of the Eads Bridge, and bus stop enhancements. These are just a few Metro projects that have attracted federal dollars for system improvements that will not only provide a better experience for Metro customers, but will improve the infrastructure of the entire region.