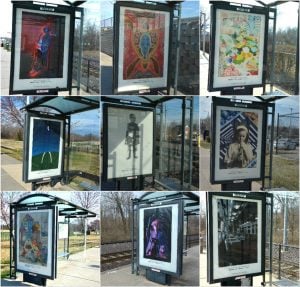 Vories showcased her MetroScape artwork, which featured Rosa Parks sitting inside a bus.

“Hopefully it brings hope and yet challenges the idea that we all need to be working together and that there’s a greater cause, a greater voice,” she said during the show. (Scroll to 5:19 to see her story.)

Chappell also featured his MetroScape piece along with other artwork from his portfolio that he’s created for local organizations, such as the St. Louis Zoo. Chappell created a whimsical MetroScape of the statue of King Louis IX of France, which overlooks Art Hill in front of the St. Louis Art Museum.

“It’s good to meet all different kinds of people within the area that you’re interested in,” Chappel said during the show, “because you never know what’s going to lead to the next thing that drives you.” (Scroll to 6:16 to see his MetroScape.)

Metro Arts in Transit, in conjunction with Lamar Advertising, invited local artists to submit their artwork to MetroScapes last fall. Submissions were reviewed by a panel of artists and art professionals who selected the winning pieces based on quality of work, appropriateness for public display and image clarity, as well as content that was intriguing, thought-provoking, inspirational, entertaining and/or enduring.

Vories and Chappell were among 11 artists chosen for the inaugural MetroScapes public transit art exhibit this year. The pieces were chosen from a group of nearly 100 submissions. The posters are currently featured at more than 200 MetroBus shelters in the St. Louis region and will be on display for one year.

Metro Arts In Transit is gearing up for its second MetroScapes art exhibition and plans to kicks off the next entry period for submissions shortly. Stay tuned.