Obama, Oberstar Differ on Course of Action for Transportation Bill 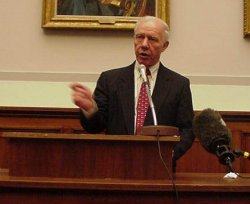 The focus in Washington and across the country is the issue of health care reform and the economy, but another big dilemma is looming on Capitol Hill: transportation.  SAFETEA-LU, the current transportation funding authorization bill, is set to expire on September 30.  Without a new source of funding, the Federal Highway Trust will bankrupt, interrupting  projects and threatening thousands of jobs across the country.

But the White House and the House of Representatives seem at odds with what is the best course of action.

Rep. Jim Oberstar (D-MN), chairman of the House Transportation Committee and ranking committee member Rep. John Mica (R-FL),  released a new $500 billion transportation authorization bill that promises to bring sweeping changes to federal transportation programs to face the nation’s aging transportation network.  The  bill draws more attention to funding alternative modes of transportation including public transit, and emphasizes efficacy and accountability for all projects.  The bill does not include, however, a mechanism for funding the ambitious legislation.

Instead of backing the House bill, the Obama Administration is calling for a 18-month extension to SAFETEA-LU, requiring Congress to approve an estimated $20 billion for the Highway Trust Fund to make up for a reduction in federal gas-tax revenues, the fund’s main source of revenue.  The proposed extension would then push back the urgency of any major discussion on transportation, likely to bring up increasing taxes, until after next year’s midterm Congressional election.

Oberstar, however, is arguing that now is not the time to delay on discussing the nation’s transportation future:

[The delay is] “madness. Just Madness. It’s shortsightedness of the worst kind. This administration came in promising change. And we’re offering the most sweeping change since the department was created. Since the interstate was established in 1956. They are responding, ‘We need more time.’ Well, we can’t afford time. The public can’t afford time.”

The importance of transportation infrastructure is evident; the creation and expansion of the Federal Interstate Highways helped propel the nation’s economic prosperity and growth over the last sixty years.  But we are facing new challenges today – the demands of congested and sprawling metropolitan areas, climate change, and a sagging economy.  What can we afford to do or not do to protect our nation’s transportation system?

In Washington and across the country, let the discussion begin.

1 thought on “Obama, Oberstar Differ on Course of Action for Transportation Bill”