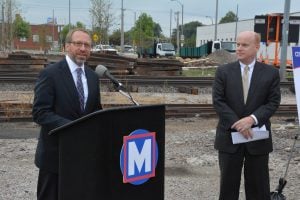 A top representative from the U.S. Department of Transportation (DOT) came to St. Louis today to officially announce the award of a $10.3 million federal TIGER grant to the Bi-State Development Agency/Metro. The federal funds will help pay for a new MetroLink station in the Cortex District and other transit improvements in the Central Corridor of St. Louis.

DOT Under Secretary for Policy Peter Rogoff as well as Federal Transit Administration Regional Administrator for Region 7 Mokhtee Ahmad shared the good news with Metro and its partners during a news conference this morning near the future site of the MetroLink Station. The new station will be constructed between Boyle and Sarah Streets, north of Interstate 64. It will be located about halfway between the Central West End MetroLink Station and the Grand MetroLink Station.

In addition to a new MetroLink Station, funds from the federal Transportation Investment Generating Economic Recovery (TIGER) grant also will be used to expand the busiest MetroLink station on the light rail system, the Central West End Station. The money will also be used to create the first section of a bike trail to connect the new MetroLink station to the regional Great Rivers Greenway trail network. 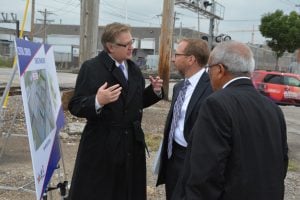 The total cost of the project is estimated at $12.9 million with local funding sources committed to providing the remaining $2.6 million needed.

The project will create about 170 construction jobs and support transit alternatives for the estimated 13,000 permanent jobs to be created in the Cortex area and throughout the Central St. Louis Corridor.

“These TIGER funds will go a long way to help St. Louis achieve its goal of developing a job-creating technology hub that is fully accessible by public transportation,” Rogoff said. “The TIGER Program is ideally suited to projects like this that leverage transportation as a means of strengthening communities and creating new opportunities for thousands of residents.”

The project is one of 72 transportation projects selected to receive a total of nearly $600 million in 46 states and the District of Columbia from the U.S. Department of Transportation’s 2014 TIGER Program. The Department received 797 eligible applications from 49 states, U.S. territories and the District of Columbia, an increase from the 585 applications received in 2013. Overall, applicants requested 15 times the $600 million available for the program, or $9.5 billion for needed transportation projects.