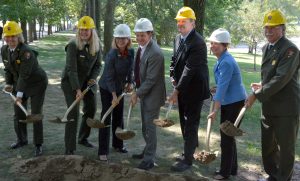 The National Park Service broke ground yesterday afternoon on the next phase of enhancements to the Jefferson National Expansion Memorial grounds.

The construction of these two projects is funded by Proposition P, which St. Louis City and St. Louis County voters passed in 2013.

Renovations to the Arch grounds include enhancing pedestrian accessibility by creating new pathways from the Gateway Arch to the Mississippi Riverfront, building sustainable ponds, replacing soil and trees and landscaping improvements.

As part of CityArchRiver 2015, Bi-State Development Agency is partnering with the City of St. Louis, Great Rivers Greenway and the National Parks Service to establish an enhanced bike trail between Chouteau Avenue and Biddle Street.

The Bi-State Development Agency financed the tram system in the Gateway Arch when it was constructed 50 years ago and has operated the trams since it opened to the public in 1967.