On Board With Our Airport Director, Starting His Career Hanging over the Airport Fence as a Kid

Peter Pan said to fly, all you needed was ‘faith and trust and just a little bit of pixie dust.’ Well, what you really need is to know someone with a plane and love for flying. 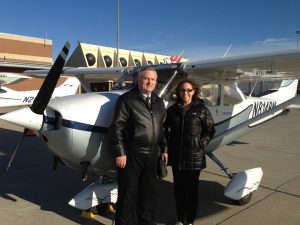 Bob and Chelsey with his plane

But seriously, have you ever wanted to fly? St. Louis Downtown Airport and Heliport Director Bob McDaniel has wanted to fly since the age of three. His passion for flying has taken him on an incredible life journey.

One day last month, Bob was nice enough to share his story, and love for flying with me.

We started the afternoon with a trip in his 1967 Cessna 172. I’d be lying if I said I wasn’t a little nervous. Being inside his plane felt like sitting in a compact car, except we were about to go 1,500 feet in the air. We traveled down the runway, checked everything on the plane and when we were clear to go, Bob took us up!

Sun in the sky, butterflies in my stomach, smile on my face and a humble pilot pointing out landmarks around the route. It was truly a once in a life time moment. 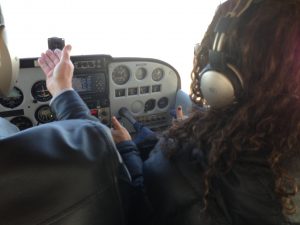 And then Bob said, ‘So are you ready to fly?’ Those who know me well would tell you public transit is the best option for me; my driving record isn’t great. But, with Bob by my side and Daniel Adams, an airport maintenance technician behind me snapping photos, I couldn’t say no. I grabbed the controls, held on tight and listened to Bob calmly direct me through the sky. “Our lives are in your hands,” words I’m never fond of hearing came out of Bob’s mouth. After my part-time pilot gig was over, I returned the controls to Bob and was able to really take in everything. Bob showed me how beautiful and peaceful flying is. It was easy to see where Bob gets his passion and love for flying.

After about 40 minutes of pure euphoria, it was time to come back down to earth. We smoothly landed at the St. Louis Downtown Airport and I sat down with Bob in his office. And here’s what he told me.

“My earliest memory of wanting to fly was as a child of about 3 years old sitting in my sandbox watching airplanes fly over head. I’ve always been fascinated with airplanes. I grew up right across the street from Saint Louis University Parks College Air Field where students and their planes flew directly over my backyard at about 300 feet.” 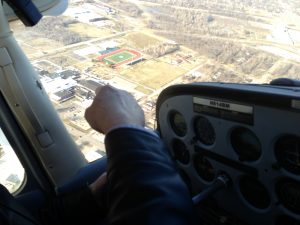 When Bob was 14 years old, he mowed lawns for extra spending money. When he wasn’t in school or mowing lawns, he was hanging on the fence of the airport watching planes fly in and out.

When Bob was 15, he found a Discover Flying coupon in a magazine. With the coupon and five dollars, you got you your first flying lesson. “So I got $5 of lawn mowing money out of my pocket, cut out the coupon, hopped on my bicycle and rode to this airport where I took my first flying lesson,” Bob told me with a subtle smirk. “Then rode my bicycle home and told my parents about it. Fortunately, I had some pretty understanding parents.”

The next day his parents accompanied him on his next flying lesson. He worked all summer mowing lawns and as soon as young Bob got enough to pay for a lesson, he would head to the airport. “It’s kind of magical coming back to run the airport where you learned to fly,” Bob added.

But Bob didn’t just learn to fly at the St. Louis Downtown Airport, he worked here as a teen. “During the time when I was taking flight lessons if I wasn’t flying I was simply hanging over the fence watching airplanes fly. One day I was hanging over the fence and a guy in greasy coveralls, in an old World War II surplus Jeep drove up along the inside of the fence. 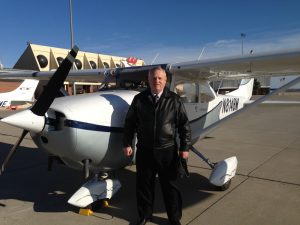 Bob worked hard cutting grass at the airport, washing airplanes, gassing planes, mopping the floors, cleaning the urinals, and doing anything they would let him.

“I worked at this airport all through high school and college. I went to Parks College. That was the height of the Vietnam war, and this Air Force ROTC thing seemed like a really good deal,” Bob told me. He joined the Air Force, went through Air Force pilot training, and spent 25 years in the Air Force. When Bob retired from the Air Force, he worked in Texarkana, Texas. Bob ran the Texarkana Regional Airport for three years. 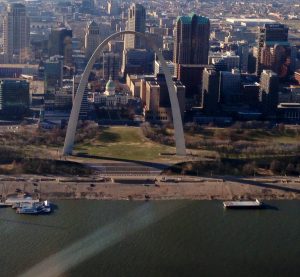 View of Downtown St. Louis from the sky

After 13 years, the former Airport Director of the St. Louis Downtown Airport retired and Bob has been here ever since.

“My favorite thing about this airport is being here; never doing the same thing twice. Never feeling like I’m coming to work, because every day I get to do things like take you flying. Aviation is something that is special; very few people feel it is a job. If you hang around an airport long enough, you either get tired, go somewhere else or it gets into your blood. It couldn’t chase me away; it’s definitely in my blood.”

Bob pointed out that aside from the obvious transportation benefits, St. Louis Downtown Airport has a large financial impact on the region. “We have a 584 million dollar economic impact to the region… We are here for business aviation. We’ve got close to 2000 high paying jobs, the importance to the region and the economic impact is why we are here.”

“Any advice to the young aspiring pilots out there?” I asked.

Bob smiled, “Get involved, and never pass up a chance. When I was getting started, I could ride my bicycle out in front of the hanger, park it, and sit on the picnic bench. If a new airplane came in, I walked out on the ramp and talked to the pilot. I asked questions, got in the way of the mechanics, and those opportunities are few and far between. There are a lot of organizations you can get involved with. EAA–Experimental Aircraft Association, our museum has room for volunteers, Civil Air Patrol, Scouts, there’s all types of opportunity in aviation but you have to be willing to look for them. There are still plenty of opportunities to come out and make conversation with the pilots. If you come out enough, eventually someone will invite you into the backseat of their airplane.”

Bob has shared his wonderful story with the world in his book From The Sandbox To The Clouds.

If you have more questions about St. Louis Downtown Airport and Heliport, visit the website.