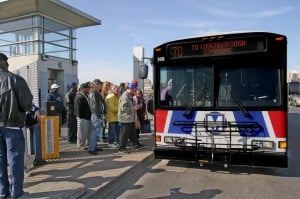 The Connector Study – led by the Bi-State Development Agency/Metro and their partners East-West Gateway Council of Governments, MoDOT, St. Louis County and the City of St. Louis – seeks to offer efficient, competitive, and attractive transit service to more people and places in the St. Louis region. Some of the improvements to be considered are easier north-south and east-west transit connections, faster commutes, economic development opportunities, and reduced traffic congestion.

After several recent public presentations and open houses, the virtual meeting is set to run through May 13 to provide the same information and opportunities for public input, but to a wider audience using a convenient online format.

The study is using a data-driven approach to identify and evaluate potential projects.  Recommendations will be shaped by several objectives, including:

Feedback is critically important to the study and we want to hear from as many people as possible.

Please send your comments via our on-line public meeting comment form to let the study team know what you think about the study so far.