Passengers, like Brad, depend on Metro transit to get to work, school and other important destinations. We hope you enjoy his story, and we’re interested in your transit story too. Email mrhibbard@metrostlouis.org, and we may share your story in a future “Passenger Profile.” 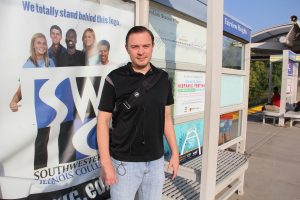 As an employee of U.S. Bank in downtown St. Louis, Brad knows a thing or two about saving pennies. To keep more money in his pocket, Brad uses MetroLink to get to work each week.

And it’s paying dividends. According to Brad, he’s able to save about $60 a month using MetroLink, and that’s not even including what he’s saving on gas. Brad, who’s been riding MetroLink for more than five years now, says he puts this money into savings.

Brad’s regular commute starts by boarding a MetroLink train at the Fairview Heights MetroLink Station and riding it to the Convention Center MetroLink Station. From there, it’s only a few blocks to U.S. Bank’s office at 7th and Washington.

In addition to the cost-saving benefits, Brad also enjoys riding MetroLink for the time he gets to himself and the stress reduction.

“I enjoy listening to Pandora and catching up on the news,” he said. “And it definitely lowers traffic frustration.”

Brad also rides MetroLink to attend sporting events downtown, like Blues, Rams and Cardinals games, and he used it to attend Mardi Gras this past winter. He says it’s easy to choose MetroLink because it’s reliable.

“The train is pretty much always here exactly when it’s scheduled to arrive,” he said.