In celebration of our articulated buses going into service this week, we thought we’d do a special Passenger Profile. David Young is an archivist and transportation enthusiast. You’ve seen a number of his photos featured in our Flashback Friday blogs. 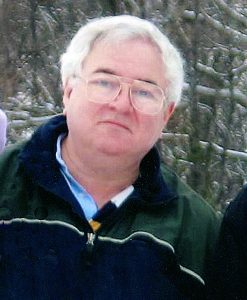 To say David has a passion for public transportation is quite the understatement.

David moved to St. Louis from the United Kingdom in 1972, having previously passed through only St. Louis once, in the summer of 1965. He heard St. Louis still had a streetcar line in operation, but he just needed to find it.

“I had been told the city had one line left and I got off a New York-Los Angeles Greyhound bus on a St. Louis layover one afternoon and began walking around looking for it,” David said. “I did not find it after over an hour wandering around downtown. I got back on the Greyhound, which duly pulled out and after about two minutes we crossed the Olive intersection, and that’s when I saw from out the window three streetcars on Olive around the public library.”

David was curious to see the last remaining streetcar line in St. Louis. He believed he was witnessing the last operating remnants of a transportation era going back to the 19th century.

Years later, after moving to St. Louis, David got involved with a crowd of streetcar, transit and local history people, but none of them could tell him much about the streetcar system as a whole, nor could they point him to any books on the subject.

“So, by trade as an archivist and historian, I researched the subject myself and wrote the book [The St. Louis Streetcar Story], synthesizing the research material into a passable, if dry, story liberally sprinkled with pictures,” David said.

That one book has turned into quite the collection. David has written or compiled around 20 books on various transit topics since 1968, including the UK transit systems, manufacturers of transit equipment including St. Louis Car Co., Moog Automotive and the national heritage trolley and trolley museum movement.

“I’m not the one who will write the next American novel nor provide the world with any sort of deathless prose, but I do have that urge which drives the best teachers and communicators to talk, lecture or write on topics that intrigue them,” David said. “Ideally, I hope to pass on a little information wrapped up in an entertaining and attractive package.”