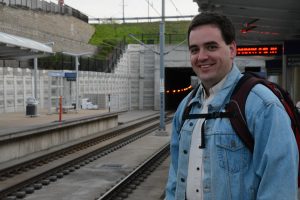 The only time Philip has a chance to listen to his podcasts is when he is on a MetroLink train.

Philip either listens to financial or technology podcasts as he makes his way downtown. He typically wakes up around 5:15 a.m., catches a ride from his sister to the Brentwood I-64 MetroLink Station and boards the 6:45 a.m. eastbound train to the Central West End MetroLink Station. If the weather is nice, Philip walks the rest of the way to work.

Philip started using Metro back in the 90s when he took MetroBus to get to and from Christians Brothers College (CBC) High School (back when it was located in Clayton).

Philip also uses Metro to help save up for another car for his family. His goal is to pay cash for a second car. So far, using Metro has allowed Philip to avoid applying for a car loan.

Philip uses MetroLink every once and a while to catch a game downtown. He also has taken the train to get to the Gateway Multimodal Transportation Center at the Civic Center MetroLink Station. That center has access to Amtrak and Greyhound services.

As for public transit advice, Philip recommends riders review their routes beforehand and understand how much time their trip will take. You can find out how long your trip will take using our Trip Planner.

“Do your research before hand,” he said.