Passengers, like Shane, depend on Metro transit to get to work, school and other important destinations. We hope you enjoy his story, and we’re interested in your transit story too. Email mrhibbard@metrostlouis.org, and we may share your story in a future “Passenger Profile” blog. 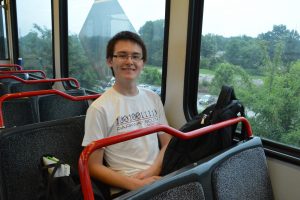 For the past five years, Shane rode Metro “intermittently.” But this summer, Shane put his public transit use into full gear, and now he’s riding the system almost every day to get to his internship at Washington University.

In addition to getting to Washington University, Shane also rides Metro to travel to downtown St. Louis and recently used Metro to attend this year’s Fair Saint Louis.

For Shane, using Metro has another perk. As an intern at Washington University, he’s able to take advantage of Metro’s U-Pass program, which provides unlimited rides on MetroLink and MetroBus.