OK, so clearly I won’t be in the running for a literary Pulitzer anytime soon. But, if you ask me, some local poets may be.

Last night, the 10 winners of the 2013 Poetry in Motion Contest® sponsored by Metro Arts in Transit, the Poetry Society of America, and the Regional Arts Commission (RAC) were honored. The Poetry in Motion® Reading and Reception was held at The Studio of the RAC in University City.

Comedian Amy Milton was the master of ceremonies. Milton is currently pursuing a master’s degree in Creative Writing at the University of Missouri-St. Louis.

Milton welcomed the winners and attendees by starting off with a poem by Frank O’Hara titled Why I Am Not a Painter. Milton congratulated the winners and pointed out, “Most people think poets are very whimsical and kind of weird, but you all look all there!” 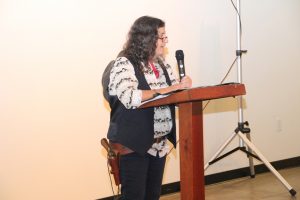 Featured Poet Jane Ellen Ibur, dressed in western attire, started  by reading her own poem titled Black Hat. During the first year of Poetry in Motion® in St. Louis, it had been selected as one of the winning poems and had been placed on a MetroBus.

All of the contest winners were in attendance and all read their winning poems. You can see video of all 10 poets reading their poems below.

Contest winner Sandra Cannida said she has been writing poetry since the fourth grade. “I have always wanted some recognition and getting inner city recognition is just wonderful,” said Cannida. “All of it has just been on the Internet so far!”

Each winner brought a different vibe to the event with their poem. Some were sad or serious, and others empowering or bright. Each poem was unique, and each poet was very passionate. 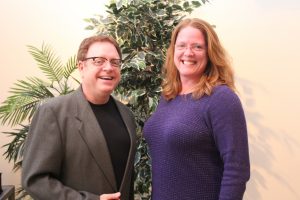 Contest winner Aaron Williams has been writing poetry since the thirdgrade. He even recited the first poem he ever wrote for me! I can’t even remember what I had for breakfast.

Williams told me that while his winning poem was a brain child of his, it wouldn’t have been possible without the help of a St. Louis County Police Officer. “I was walking on a trail and the poem just came to me. I was running around, I needed to get it on paper before I lost it,” explained Williams. “I ran up to a police officer and begged her to help me. She pulled out a pad and pen. My poem wouldn’t have been possible without her and she’s coming tonight!” Sure enough, St. Louis County Police Officer Jill McCarl was there last night.

Contest judge Barrett Taylor, a St. Louis Public Schools administrator, said there was a huge pool of talent to choose from. “I really looked for something that resonated with me,” said Taylor. “I really wanted to have a feeling or emotion that sort of came out of the poem.”

Following a brief intermission, Ibur read two more of her western poems. She painted such a vivid picture, I expected to walk outside and see a tumble weed brush past my feet.

Art in Transit Director David Allen and Milton then awarded each contest winner with a check for $50. Frank Kras received $100 because he submitted two winning poems. In addition, all eleven poems selected will be displayed on MetroLink trains and MetroBus vehicles for up to one year.

Congratulations to all of the talented poets– Sandra Cannida, Antoinette Crayton, Linda O’Connell, Heather Farrar, Elona Johnson, Frank Kras, Madeline Jean Jackson, Grady Manus, Patt Hollinger Pickett, and Aaron Willliams! The next Poetry in Motion® contest is expected to kick off in the Spring of 2013.

Click here to view more pictures from the event.