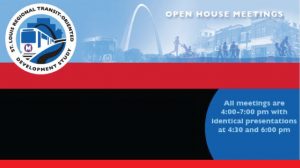 The East-West Gateway Council of Governments is leading the project and the Bi-State Development Agency/Metro is one of 11 agencies partnering in the project. The purpose of the federally funded Transit-Oriented Development (TOD) study is to create more places to live, work, shop and play near the light rail stations.

The overall effort is geared toward creating a vision and a road map for how to stimulate transit-oriented development in the St. Louis region.

Three open house meetings are scheduled Tuesday, Wednesday and Thursday (December 11, 12, and 13) for residents to learn about transit-oriented development and to consider potential development options for the viability of transit-oriented development around the selected five stations. Each meeting will feature a one-hour presentation that focuses on one or two of the selected stations at 4:30 p.m. and then again at 6 p.m. After each presentation, through interactive keypad polling, residents can express their thoughts on development opportunities and amenities they would like to see occur around the four selected MetroLink stations. The format and information presented will be the same at all three locations below:

If you can’t attend any of the meetings, you can participate by taking an online survey starting Friday, December 14. The online survey will be available through January 26, 2013. More information about the TOD Public Informational Meetings and the study can also be found here. As part of Metro’s contribution to the project, Metro staff members performed an analysis of all 37 MetroLink stations and compiled a detailed Station Area Profile for each one. The profiles can be viewed here.

After looking at all 37 stations, plans will be created for five MetroLink stations to outline how future development will proceed at each of the five stations and a detailed road map will be provided for developers and local governments to complete new transit-oriented developments over the short and long term.