Put on your dancing shoes – MetroLink Prom is this Friday

I recently had the opportunity to sit down with Claire Nowak-Boyd, one of the organizers of the MetroLink Prom, to discuss the event with her. But first, the details:

Who: You, and all of your dancing, fun friends.

Where: Meeting at the Forest Park MetroLink Station; traveling westbound to the Clayton Station on the 7:57 p.m. train, where the Prom King and Queen will be elected and dancing will occur; then traveling eastbound at 8:30 p.m. to Laclede’s Landing for an evening of dancing at the Morgan Street Brewery.

What you need: Cash for train fare (and Morgan Street), dancing shoes, formal wear from any decade, a sense of fun. 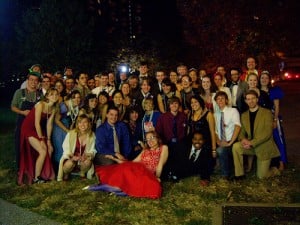 Claire is a local preservation activist, urban enthusiast blogger, and all-around fun lady. We met at Urban Studio Cafe (right next to Crown Candy Kitchen) for coffee on a cold & rainy morning, and she told me how she and her friends, including Miss MetroLink (Liz Kramer at WashU) and Melissa (our former summer intern) decided to celebrate MetroLink: Seems that Liz saw a parade float featuring “Miss Metro” downtown one day, and labored under the happy delusion for a few hours that Metro, the transit agency, had some kind of pageant and crowned a Miss Metro. After she realized that “Miss Metro” must really be Miss Metropolitan St. Louis, and not the Transit Queen of St. Louis, Liz decided to declare herself Miss MetroLink and she and her friends decided that the only fitting thing to do would be to hold a fancy dance on the MetroLink to celebrate.

Last year’s Prom brought out more than 80 attendees, complete with an a cappella group who provided the music for dancing. (Watch the video from MayorSlay.com.) Why a Metro-themed dance? “When you’re not driving,” Claire told me, “You can do whatever you want.” Claire and her friends think that transit is fun, it makes their daily experiences better, and they want to celebrate. What more reason do you need?

Metro doesn’t sponsor, plan, or direct this event – we simply look on with amusement, joy – and support. Claire, who is soon moving from Old North St. Louis to Detroit, told me she thinks it’s important for individuals to speak up when they have a chance to lead. “It’s important to me,” she said, about her time in Old North and her upcoming move, “to be someplace that you count, where you’re not just another voice.”

If you have any questions about MetroLink prom, you can contact Claire through her blog, Curious Feet St. Louis. Otherwise, grab your dancing shoes, your crazy 80s prom dress, and see you on Friday night!