Reminder: MetroLink Passengers to be Shuttled by Bus January 16-17 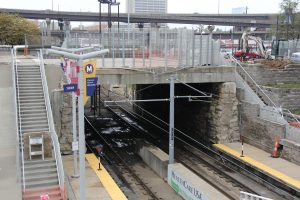 MetroLink passengers should allow extra time for their commutes on Saturday, January 16, and Sunday, January 17, as MetroLink trains will not operate between the Civic Center and 5th & Missouri MetroLink Stations that weekend.

MetroLink Station Shuttles will transport passengers by bus between the Civic Center, Stadium, 8th & Pine, Convention Center, Laclede’s Landing, East Riverfront and 5th & Missouri MetroLink Stations. Trains will not be able to travel through downtown St. Louis due to the demolition of the Spruce Street Bridge near Busch Stadium. Passengers traveling through the affected area should expect delays of 20 to 30 minutes.

The following stations will be served by MetroLink Station Shuttles. Metro will have personnel at all of these stations to assist passengers:

MetroLink will resume normal operations between the Civic Center and 5th & Missouri MetroLink Stations by the beginning of service on Monday, January 18. Updates on MetroLink operations can be found via social media on Metro’s Twitter feed at @STLMetro and on Facebook at St. Louis Metro Transit. Passengers can also call Transit Information at 314-231-2345 or 618-271-2345 Monday through Friday between 7:30 a.m. and 4:30 p.m.

1 thought on “Reminder: MetroLink Passengers to be Shuttled by Bus January 16-17”