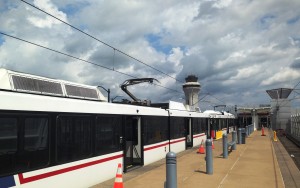 Are you using MetroLink to travel to or from Lambert-St. Louis International Airport in the next few weeks? Here’s some information you’ll want to know before you head out.

The airport will operate free Terminal Shuttles to connect Metro passengers between Terminal 1 and Terminal 2. During the Lambert Airport Terminal #1 Station closure:

The airport will have signage to help direct passengers to the Terminal Shuttles. Riders are encouraged to allow extra time during these trips, as they may experience delays of up to 30 minutes when using the shuttles to travel between the two terminals.

From 8 p.m. Friday, July 24, until end of service on Sunday, July 26, one side of the Lambert Airport Terminal #1 Station platform will be closed as crews begin preparing for the rehabilitation project. MetroLink customers will still be able to use the station during this period, but will access trains only on one side of the platform. MetroLink will operate on a normal weekday schedule on Friday, July 24, and on a normal weekend schedule on Saturday, July 25 and Sunday, July 26.

Both MetroLink Stations at the airport are owned by Lambert-St. Louis International Airport. The airport is managing the project contractor and funding the improvements to the Lambert Airport Terminal #1 Station. This is the first major rehabilitation of the station since it opened in 1994.