Update: The Burnin’ Love event at Art Hill in Forest Park was rescheduled Friday, Feb. 14 to Tuesday, Feb. 18 due to icy weather conditions.

Yep, it’s been 250 years since that blustery February day in 1764 when a 14-year old Auguste Chouteau and a company of a few dozen men approached our now familiar bend in the Mississippi in their small river boat.

The Biggest Birthday Bash at the Missouri History Museum

Reenactment of the Founding at St. Louis City Hall

A reenactors encampment, set up at the southern leg of the Gateway Arch, can be viewed from 11 a.m. to 4 p.m. Take the MetroLink Red or Blue Line to Arch-Laclede’s Station.

The Biggest Birthday Ball at the Missouri History Museum 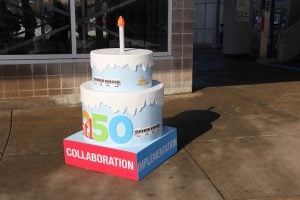 A MetroLink-themed STL250 cake can now be viewed at the Shrewsbury Station.

You can also take transit to visit many of the special 250 cake sculptures that will appear across the region as part of stl250’s “Cakeway to the West” public art project including one at our Shrewsbury Lansdowne I-44 MetroLink Station.