River to City: The View of St. Louis from the Riverboats 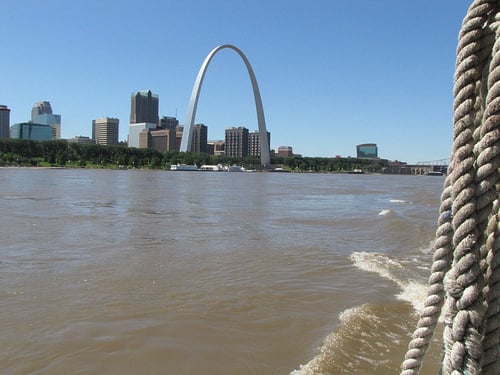 The river rises up, rich brown, foamy and yielding, against the hull of boat. The boat is smooth and calm, and I’m enamored: its my first time seeing St. Louis from the waters of the River, looking up at our city.

I’m on the Tom Sawyer, one of the riverboats that Metro operates on the riverfront of the Mississippi River.  It’s a beautiful Friday afternoon, one of the most seasonable days in May, where the sun beats a warm St. Louis heat but with a hearty breeze and impenetrable sky.  The perfect St. Louis afternoon, a few moments before a holiday weekend, to climb aboard a boat and tour the St. Louis riverfront.

A view of St. Louis from the Mississippi River is perhaps one not many of us have experienced, but it was the first.  Pierre Laclede and his assistant, Auguste Chouteau, staked out St. Louis in 1764 for their settlement near the Confluence of the Illinois, Mississippi and Missouri Rivers. Be not mistaken: We are a river town. Our history and identity runs and rides with the currents of the three rivers swollen and flowing as one.  It brought us wealth and promise; it brought us challenge and compromise.

The river was an essential form of transportation for early St. Louisans, but later posed an obstacle to improve the flow of people and goods. When you are on the river, you can see what an amazing contradiction this is: the River is strong and swift, but wide and intimidating. It’s amazing to realize that only 150 years ago, a major challenge was how to build a bridge long enough and strong enough to span the Mississippi. Now we are about to build downtown St. Louis’ sixth bridge: The New Mississippi River Bridge for Interstate 70.

The tour is rife with buildings and structures that have continuing stories of decline and rebirth. The Eads Bridge, one of the great architectural feats of the 19th century, was a commercial failure in its infancy.  But its integrity, largely untouched by years of river wear, now carries MetroLink trains into the historic tunnels beneath the City of St. Louis and into the region.  The Laclede Power Building, was constructed in 1901 to distribute electricity for the ballooning populations of the 1904 World’s Fair, is now being renovated to serve as the main “gateway” to The Confluence and as a trailhead for the Riverfront Trail. The Ashley Street Powerhouse, a darkly impressive structure that still generates steam for downtown St. Louis, bears both rich architectural detailing, and heavy coats of rust. And the Sligo Steel Building, set back from the river and nearly blocked from an elevated train track and river debris, is home to Sligo Steel, a company formed in 1834 that today is the oldest steel company west of Mississippi. 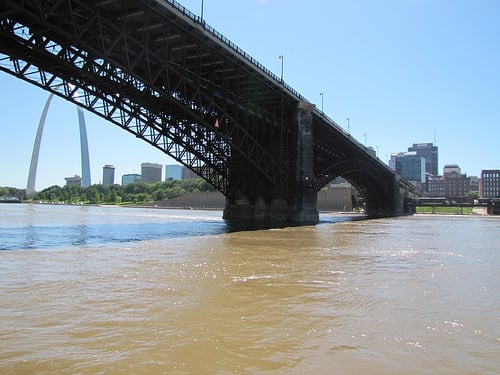 This tour is not a Floridian coastline cruise; you are on the Big Muddy, looking upon a red-brick-loving Rust Belt river city. The beauty of the scenery is its history, and the perspective the river provides. The view from the river includes the five bridges crossing the wide waters: Poplar Street, McKinley, Eads, Martin Luther King, and MacArthur Bridges. Built during different eras, with varying architectural styles, to serve different growing transportation needs, these bridges are testament to the many ways St. Louis has grown and reinvented itself over the last 150 years. 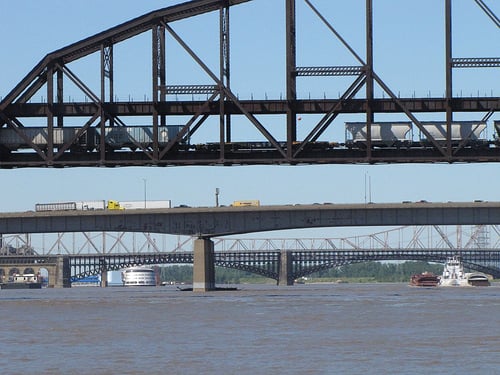 And the river keeps rolling on, watching us from below.

The Riverboat cruise gave me a great perspective on both the past and present of St. Louis, while we may think things are slow to change, the region has actually undergone tremendous evolution to adapt to needs and opportunities. When you are sitting on the deck of a riverboat, looking up at the skyscrapers, the buildings, the bridges, and of course, the Arch and its grounds, it is impossible not to realize that our story keeps on going. And once the Mississippi River Bridge and the new Arch grounds are completed, the skyline will change once again.

And at this moment, on this day, on this River, it’s a beautiful view of St. Louis. 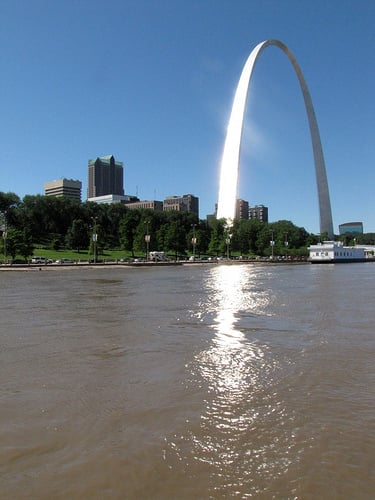 For more information on how to take a Riverboat cruise on the Mississippi River, book a group, or make reservations for one of their dinner cruises, visit the Gateway Arch website.

8 thoughts on “River to City: The View of St. Louis from the Riverboats”