The tornadoes that ripped through the St. Louis region, particularly Northwest and North St. Louis County, had a devastating effect on our community.  Metro is very fortunate to be able to offer our services to community partners when disaster strikes, often working around the clock to move people to safety, provide emergency assistance to local communities, and keep operations flowing. We would like to take some time to thank our community partners, including the City of St. Louis, St. Louis County, the Red Cross, local fire and police departments and the many Metro employees who pulled together this weekend to bring relief and safety to thousands of St. Louis residents. 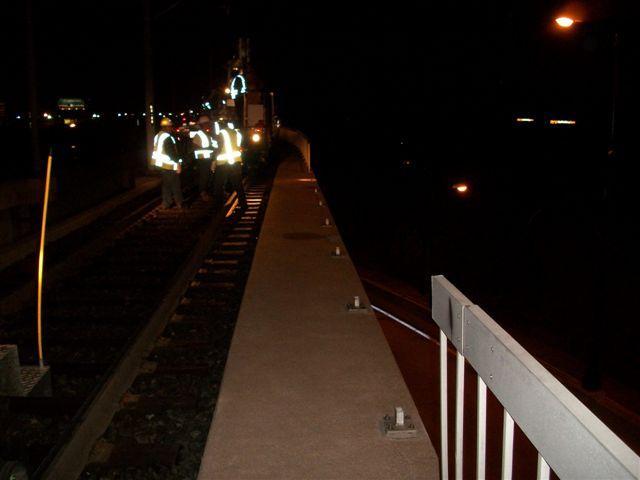 Damage to the MetroLink handrailing on Friday evening after tornado

Just before the tornado ripped across I-70, MetroLink operations held back the westbound train at North Hanley, moments before the train would have gone over the elevated tracks crossing the highway. As many as 73 Metro vehicles including MetroBus and Call-A-Ride (CAR) vans were out on the streets, trapped by lack of lights and fallen debris. Transit service managers rushed out to the field to find operators and help buses maneuver through the terrain as phone calls were coming in from the region’s Emergency Operations Center (EOC). The center is a collaborative effort by the City of St. Louis and St. Louis County to coordinate emergency response to the region, and they needed Metro’s help.

EOC requested three vehicles at the Parkwood Skilled Nursing and Rehabilitation Center in Maryland Heights to transport residents to other locations, because the building had been hit by the storm. Metro vans, able to transport multiple wheelchairs, moved 50-75 people total to shelters. CAR also helped the Woodlawn nursing facility in Arnold, Missouri move residents affected by the storm.

Saturday – Monday CAR vans and operators worked from 7:00 a.m. – 9:30 p.m. transporting people to the Maryland Heights Centre, where a temporary shelter was put into place. The vans took people back and forth to their storm-damaged homes to collect valuables and personal belonging, secure their homes, collect insurance papers and gather other necessary items from their homes.

During the storm, the tornado had ripped up part of the steel railing on the elevated MetroLink tracks above Interstate 70. Metro crews went to work immediately, working overnight to repair the railing. MetroLink was up and running Friday night, and offered to help evacuate the airport if necessary.

St. Louis Downtown Airport which owned by Metro became the landing destination for several corporate aircraft and charters which could not land during the temporary closure of Lambert-St. Louis International Airport.

By Sunday morning, MetroLink service was up and running to Lambert Airport as they began accepting air traffic. By Monday morning, all MetroBus reroutes affected by the storm were cancelled as debris had been removed from roadways.

Metro serves the entire region, and when local partners come together in a crisis, we stand with them using our buses, vans and trains throughout the area to help with the emergency response. Thank you to all the regional leaders and coordinators, as well as Metro employees, who serve these communities in this crisis and in the future.

If you would like to donate or volunteer to provide assistance to victims of the tornadoes, visit www.redcrossstl.org.