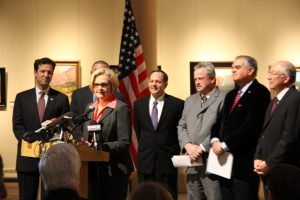 U.S. Secretary of Transportation Ray LaHood and U.S. Secretary of Interior Ken Salazar came to town yesterday to announce St. Louis has been awarded $20 million in federal grant money for pedestrian and roadway improvements as part of  the Archgrounds redevelopment project.  Salazar and LaHood were joined by U.S. Sen. Claire McCaskill, Congressman Russ Carnahan, Congressman Lacy Clay, St. Louis Mayor Francis Slay and others in the rotunda of the Old Courthouse.

The grant, in addition to funds from local sources and the Missouri Department of Transportation (MODOT), will help pay for a lid across Interstate 70 connecting downtown St. Louis to the Archgrounds. Kevin Keith, director of MODOT, said the lid project will cost $70 million and construction could begin next year.

All of yesterday’s speakers reiterated the job creation potential of the Archgrounds project, and pointed to the ArchCityRiver 2015 vision as a model of public-private partnerships for big projects in America. “There is not enough money in government. We need business to step up,” said LaHood. “And we see this as a model of a comprehensive public/private partnership.” According to LaHood, the Department of Transportation was looking for innovative, creative ideas with a local match, and St. Louis was one of only four projects chosen for the $20 million grant, the largest amount awarded. “It’s a holiday gift for St. Louis,” joked LaHood.

Salazar illustrated the historical and cultural importance of the Archgrounds area, nestled against the third largest river in the world, the Mississippi. “The CityArchRiver project is one of the 100 most important conservation projects for this administration,” Salazar said.

McCaskill, Carnahan and Clay also expressed their leadership and dedication to the project and the jobs and tourism it will bring to St. Louis.

As the operator of the Gateway Arch trams and Gateway Riverboats, Metro is a partner in the CityArchRiver 2015 project, and will provide future posts and updates about the redevelopment of the Archgrounds.