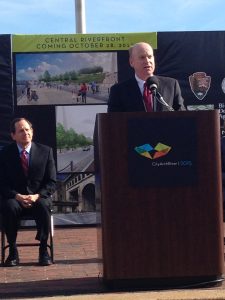 Major improvements to the St. Louis Riverfront as part of the historic CityArchRiver 2015 project are now underway. Regional leaders, residents and others celebrated the official groundbreaking last month.

The Central Riverfront project, the second component of the CityArchRiver 2015 initiative, will improve the safety and accessibility of the Mississippi Riverfront and Gateway Arch grounds for visitors and residents. 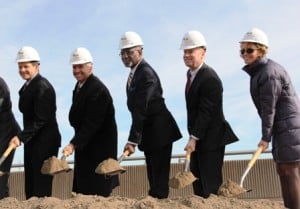 Work on the Central Riverfront project will include elevating Leonor K. Sullivan further out of the Mississippi River floodplain to help reduce flooding, creating a pedestrian walkway on the 1.5 mile corridor, creating a separated bike lane and improving the streetscape with plantings and new lighting.

As part of CityArchRiver 2015, Bi-State Development Agency is partnering with the City of St. Louis, Great Rivers Greenway and the National Parks Service to establish an enhanced bike trail between Chouteau Avenue and Biddle Street.

The bike trail is possible, in part, because of a one million dollar grant the Agency received to help fund these roadway improvements. It will also help provide a new signage plan that will work well with the National Parks Service Plan to offer useful information for visitors to the Gateway Arch and other attractions on the St. Louis Riverfront.

“For nearly 50 years, the Arch has been the iconic symbol of our region. Built as a tribute to our proud history, it is now as much of a symbol of our tremendous potential and all that is good and promising about our region. It has had the power—even before it was actually constructed – to draw us together. It summons us together again… and it will continue to remind us every day that our future is limited only by our dreams,” said John Nations, Bi-State Development Agency President & CEO. 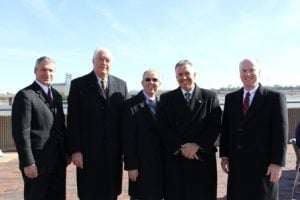 Nations and other project partners pose for a photo on the riverfront.

The Bi-State Development Agency financed the tram system in the Gateway Arch when it was constructed 50 years ago and has operated the trams since it opened to the public in 1967.