Take a Ride on the #74 Florissant

With the opening of the North County Transit Center a few weeks ago and the introduction of a new MetroBus service plan for North St. Louis County, there are a number of new MetroBus routes operating in the region. We’re taking you on a quick tour of each of these new routes so you can get acquainted with these new transit options and see all the places you can go with Metro. 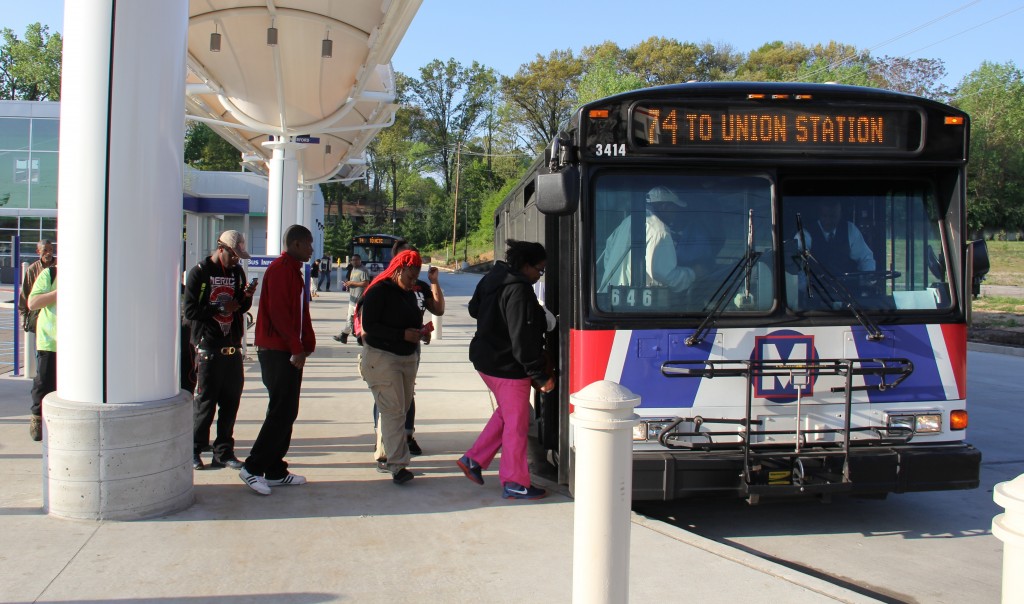 The #74 Florissant MetroBus route is a key north-south connection for the region, fulfilling strong passenger demand along West Florissant Avenue, and in the communities of Florissant, Dellwood, Moline Acres and Ferguson.

The #74 Florissant provides a fast, direct connection to downtown St. Louis from the North County Transit Center. It’s here, at the new transit center, where the bus quickly fills up before departure. The bus turns left on Pershall Road heading toward one of the region’s important arteries — West Florissant Avenue.

As the bus starts its southbound trip toward downtown St. Louis, it passes the first of several shopping centers and convenience stores along the route. From there, the scenery switches back and forth between small storefronts to tightly-woven neighborhoods. As the bus continues south, fewer and fewer seats are still empty.

It’s around this time Olivana boards the #74 Florissant bus. Her destination is downtown St. Louis where she will connect with MetroLink at the Union Station MetroLink Station. The #74 Florissant bus route is her link to downtown and ultimately to her job at Busch Stadium. But, she relies on the route for more than her work commute. She also uses it every day throughout the week to run errands and to go to doctor’s appointments. 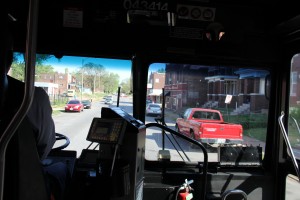 Looking out the window, the view changes a bit as the bus nears Lucas and Hunt Road. The bus passes the corporate headquarters of the Emerson Electric Company and parts of the Norwood Hills Country Club on the right and the Buzz Westfall Shopping Center on the left before the familiar toss between residential and commercial returns.

The scenery changes for a good stretch of the route as it passes through the intersection at Riverview Boulevard. This is where Calvary Cemetery starts to come into view, a 470-acre property with more than 300,000 graves, including those of General William Tecumseh Sherman, Dred Scott, Tennessee Williams, Kate Chopin and Auguste Chouteau.

The bus crosses over Interstate 70 and passes O’Fallon Park and a neighborhood dotted with distinctive red brick homes — a nod to St. Louis’ unique architecture. The #74 Florissant connects with the #70 Grand route in the College Hill neighborhood and this is where the bus nears its full capacity. From there, the bus passes Old North St. Louis and St. Louis Place neighborhoods, and begins to enter the St. Louis downtown core.

Passengers start to get off the bus at this point, bound for key job centers and attractions like the St. Louis Public Library, St. Louis City Hall and Union Station. The bus ultimately reaches its temporary terminus near the Union Station MetroLink Station. (The #74 Florissant usually would end at the Civic Center Transit Center, however due to construction, the bus route and 17 other MetroBus routes end their trips near the Union Station MetroLink Station.)

After a small break, the bus heads back north, picking up passengers along the way until it reaches the North County Transit Center.